Gaming with a purpose

Children with 22q11.2 deletion syndrome and other neurodevelopmental disorders may benefit from a video game now in development at the UC Davis MIND Institute. Tony Simon, Professor of Psychiatry and Behavioral Sciences and director of the 22q11.2 Research Center and Clinic, describes his prototypical “digital therapeutic” that is showing promise in promoting improvements in neurocognitive processing abilities.

[Transcript of video below]

“I hope that he is able to get the funding to make it a bigger video game. It would just be so great to have something that can help but that isn't hard,” said Christy Wold, mother of 7-year old Caleb who was born with 22q deletion syndrome.

“The problem we're trying to address with the technology here is that we have a lot of evidence that several kinds of neurodevelopmental disorders generate problems in the mind and brain of children and adults who are affected,” said Tony Simon, professor of psychiatry and behavioral sciences and director and of the 22q11.2 Research Center and Clinic. 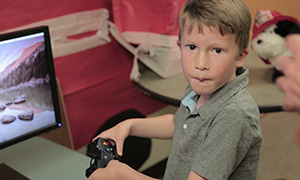 “That makes it very difficult for them to mentally represent information about space and about time,” he said. “I often use the analogy to a digital camera. It's like having a low-resolution digital camera, where some of the information is missing. So when you try to sort of zoom in and make a distinction between two small things, you don't have access to the information anymore.

“That makes it very difficult to learn some very basic and very important functional skills in life like thinking about numbers, about time, money, learning arithmetic — very important things that you need to function well,” Simon said.

“Caleb is 7-years old, and he has 22q deletion syndrome, Wold said. “It was diagnosed at birth and he is an awesome little boy who loves baseball, loves his big sister. A great kid."

“22q deletion syndrome is caused by a deletion on the 22nd chromosome. It happened new with Caleb, and it's caused him to have a number of different issues. He had open heart surgery when he was three-weeks old and six-weeks old, but he's always been a real trooper. He's done really well with all of it.

“The reason that we went to a video game kind of approach is that it sort of became clear there was an evidence base emerging that young adults, college kids who play first person generally shooter style video games are actually showing increased capability of the same functionality that we were discovering that children with these neurodevelopmental disorders were impaired at,” Simon said. 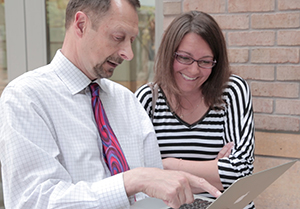 “And so the question for me then became what was the active component in those kinds of games that we could extract out and make much more palatable. Games with much more targeted interventions for young kids with neurodevelopmental disorders,” Simon said.

“We built a prototype to see if we could turn those scientific ideas into something that looks and plays like a fun video game. Our first version only tried to make a game that adjusts to the play, spatial and temporal abilities because we needed to get that right before creating the game's active component. In this version we get kids to zap the energy out of ghosts that pop up at different speeds and distances around the little ghost buster avatar. Our early finding suggests it's a fun game with positive impact on spatial attention and we need to actually build a much more fully functional version of the game and then really engage in something that more resembles a clinical trial to see whether we can show that it has the effect that we believe it's supposed to have,” Simon said.

“I would love for him to have as many opportunities as possible to, you know, gain cognitive function and to be healthy and thrive in the world that he's living in,” Wold said. “I feel like that's what the focus of the MIND Institute has been.  It is not just focusing on how it happened or why it happened, but they really do try to say what now, what can we do now to improve the lives of these kids and then he can go on to, you know, actually get benefit out of it. That would be awesome.