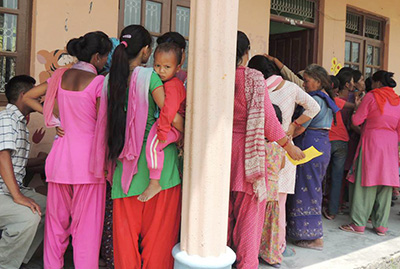 Residents of a rural village line up to receive medical attention.

When a massive earthquake struck Nepal in late April that left thousands dead and injured, followed by a series of aftershocks, the episode was more than just the latest natural disaster dominating the news cycle to Nate Kuppermann, chair of the UC Davis Department of Emergency Medicine.

For Kuppermann, the event had a personal dimension. He has a nearly three-decade long association with Nepal, dating to 1987. Then, on a year-long hiatus as a resident in pediatrics, he spent nearly six months in Kathmandu, providing health care to indigent Nepalese and Tibetans living in that city and surrounding rural villages.

Returning on a medical mission

Following April’s earthquake, Kuppermann returned to the country to provide medical care to people who were injured or otherwise experienced harm from the event. He spent 10 days there in late May and early June, using the Friends of Shanta Bhawan (FSB) Clinic in Kathmandu, where he worked nearly three decades earlier, as his base.

“Destroyed homes were everywhere, and people were living in tents, buses, wherever they could find shelter,” Kuppermann said. “Historic cities that I knew very well were completely destroyed. The districts where we traveled were some of the hardest hit in Nepal. In some of towns where we traveled, more than one-half of the homes were at least partially destroyed. Many homes lacked significant infrastructure.”

Kuppermann was part of a team at the FSB Clinic that included two other physicians, whose work had been arranged by the American Jewish World Service, in conjunction with the clinic. They traveled to villages in a Jeep that served as a mobile clinic, with supplies strapped to the roof.

"I’m very committed to the Nepali people. I just decided that I could not watch from the sideline."
— Nathan Kuppermann

“We typically saw 150-250 patients per day,” Kuppermann said. “One month after the earthquake, they mainly had healing wounds, a variety of other maladies, such as pneumonia, skin infections and much PTSD (post-traumatic stress disorder). The people expressed much gratefulness for the kindness of strangers from all over the world. Everyone was doing what they could, and selflessness was everywhere.

“We delivered care to wherever the patients were: in the FSB clinic, in rural villages, in a Tibetan monastery.”

Kuppermann, his 16-year-old daughter Elie, and many international teams of medical and relief workers stayed in a quiet Tibetan guest house, in the Tibetan section of Kathmandu where he had lived in 1987. Although he occasionally was awoken at night by tremors and aftershocks, Kuppermann felt “nothing big.”

Kuppermann’s journey to Nepal was preceded by a few weeks a nearly month-long stay in the country by a third-year resident in the UC Davis Department of Emergency Medicine, Bianca Grecu. Kuppermann had helped arrange for Grecu to visit Nepal as part of her residency selective, a period that allows a resident to gain concentrated experience in an area of interest. Grecu went to Nepal and the FSB Clinic to gain a greater understanding and knowledge of tropical and infectious diseases, and to develop personal tools for working in underserved communities with limited resources.

When the earthquake struck on April 25, Grecu and her husband, Nathan Jacobs, were in the Annapurna conservancy, which was minimally affected by the quake. Back in Kathmandu, Grecu said that throughout the city and surrounding villages, “people were living in tents, cars buses. Even if their home was standing, many were fearful to go back or sleep in their homes.” 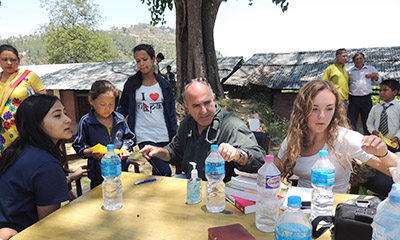 Nate Kuppermann and his daughter, Elie, see patients at a destroyed school house in a rural village outside of Kathmandu.

The FSB clinic was not busy in the week following the earthquake, so Grecu went to another hospital that needed help. However, because she was not part of an organized team and did not want to be a burden to the hospital’s already overworked staff, Grecu focused on organization and infection control.

“I was very impressed with the resilience of the Nepali people,” Grecu said. “Despite their being displaced from their homes, and living and sleeping in suboptimal conditions, I witnessed people going above and beyond to help others.”

Before the earthquake, Kuppermann had planned to accompany a group of 20 first-year medical students from UC Davis on his visit to Nepal. He was to serve as one of their preceptors as the students provided health education and primary health care in rural Nepal.

“We were all set to go, and then the earthquake happened,” Kuppermann said.

Although the students still wanted to make the journey, Kuppermann and other team leaders decided against it, because they believed that with the students' lack of expertise and defined roles, they could be — in spite of their best intentions — an obstacle and consumer of limited resources.

For Kuppermann himself, there were no reservations about traveling to Nepal.

“I’m very committed to the Nepali people,” Kuppermann said. “I just decided that I could not watch from the sideline. The FSB Clinic was emailing me, saying they could really use me, and I had friends there that were living in tents and buses.”

At the time of his first stay in Nepal, in 1987, Kuppermann was a resident in pediatrics at the Harbor-UCLA Medical Center. During his nearly six months there, he lived with a Tibetan family and came to know the Tibetan community of Kathmandu well. He helped his Tibetan "family" emigrate to the United States some years ago, and he has several Nepali and Tibetan friends from 1987 still living in Kathmandu, whom he was able to visit during his recent trip.

Father and daughter work side by side

After careful consideration, Kuppermann brought his daughter, Elie, on the trip. Although he initially struggled with concern about her safety due to the unsafe conditions arising from aftershocks, Elie and the Kuppermann family decided that she should make the journey. Kuppermann said Elie served him as a valuable medical scribe, taking notes as he cared for patients. She also demonstrated considerable skills as a photojournalist, and as a playmate of pediatric patients.

“Elie and I met great people from around the globe, doing their part,” Kuppermann said. “Selflessness was evident everywhere. All activities were very organized, with minimal chaos. I felt very needed and energized, but exhausted at the end of the day. I have never had to work so quickly and see so many.”