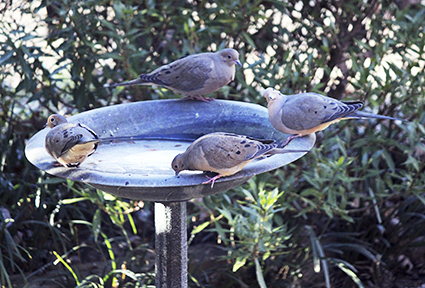 Since mosquitoes breed in stagnant water, it’s best to eliminate any areas around the home where water may collect, such as birdbaths or neglected swimming pools.

The majority of West Nile virus cases do not have symptoms, but 20 percent to 30 percent of people infected will have mild symptoms. Symptoms last for a few days and include fever, muscle aches, vomiting, joint pain and diarrhea. Only about one percent of cases are severe, known as neuroinvasive West Nile virus, and can cause seizures or meningitis.

Adults over 50 years of age and others with compromised immune systems, such as organ transplant recipients, are at a higher risk of a symptomatic West Nile virus infection.

"This death is a tragic reminder of how severe West Nile virus disease can be," Smith said in a news release issued by the department. "West Nile virus activity is more widespread in 2015 than in years past. Californians need to be vigilant in protecting themselves."

Since mid-July, the department reported 33 California counties with West Nile virus activity so far this year, four more than this time last year and above the five-year average of 22. In addition, 497 mosquito samples have tested positive for the virus, which exceeds the five-year average of 330. Eight human cases of West Nile virus from five California counties have tested positive for the virus in 2015.drought may amplify the virus by reducing sources of water for birds and mosquitoes, which puts them into closer contact with each other as they seek water, amplifying viral transmission.

“People may think that the drought will make for a summer with fewer mosquitoes and therefore fewer cases of West Nile virus,” said Dean Blumberg, associate professor and chief of pediatric infectious diseases at UC Davis Children’s Hospital.

Video: Learn how to help public-health and mosquito-control experts track West Nile virus by reporting when you find dead birds.

The California Department of Public Health also believes that thedrought may amplify the virus by reducing sources of water for birds and mosquitoes. As birds and mosquitoes seek water, they are coming into closer contact with each other, amplifying opportunities for viral transmission.

Because West Nile virus is transmitted by mosquito bites, the only way to avoid the infection is by avoiding mosquito bites. Since mosquitoes breed in stagnant water, it’s best to eliminate any areas around your home that may collect water. Common mosquito breeding spots are neglected swimming pools or birdbaths where the water isn’t changed frequently.

Blumberg recommends wearing a bug repellent. DEET and picaridin are very effective insect repellents, but there are more natural options as well, like oil of lemon eucalyptus.

For maximum protection from both harmful UV rays and mosquitos, he recommends using sunscreen first and then a mosquito repellant. And if West Nile virus symptoms arise after a mosquito bite, be sure to tell your health-care provider.

“West Nile virus is transmitted naturally between mosquitoes and birds, and some birds such as crows, jays, and magpies die from the infection,” said Chris Barker, assistant adjunct professor in the School of Veterinary Medicine at UC Davis. “Locating and testing these dead birds is a very important way of identifying areas where the virus is most active.”

If you see a dead bird, report it by phone at 877-WNV-BIRD or on the California Department of Public Health's West Nile virus website. If there’s a high number of West Nile virus infections detected in a particular area, local mosquito control agencies and the California Department of Public Health will increase their efforts to prevent its spread.