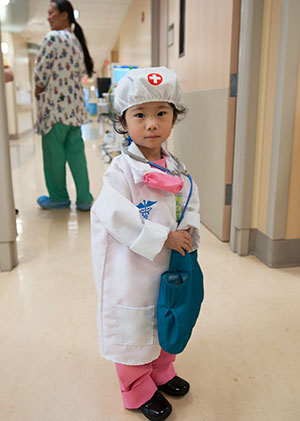 Celia Truong dreams of becoming a doctor or a ballerina.

Sacramento resident Celia Truong is a bright and bubbly 3-year-old girl, who is learning three languages and meeting all of her developmental milestones. She has dreams of becoming a doctor, a ballerina or both.

You would never know by meeting Celia that she was born only 1 pound 11 ounces and spent 93 days at UC Davis Children’s Hospital’s Neonatal Intensive Care Unit (NICU). There were dark days, when she needed to be on oxygen to breathe and it wasn’t clear that Celia would make it.

When Perla Lewis-Truong and her husband Anh Truong were expecting their first child in 2011, Perla had high blood pressure at her first prenatal appointment. It continued to rise at each appointment. After not seeing a doctor during her first trimester, the couple decided to find a new doctor at another hospital.

After asking for health-care recommendations from friends who had recently had babies, Lewis-Truong moved her care to UC Davis Health System and scheduled her 12-week appointment with her new obstetrician. During this appointment, the doctor told Lewis-Truong that her blood pressure was alarmingly high and that she could potentially develop preeclampsia.

“I said, ‘I don’t understand. I work out. I’m in good shape. I eat healthy,’” said Lewis-Truong. “But he explained that it wasn’t anything I caused or could have prevented.”

UC Davis Children’s Hospital’s Neonatal Intensive Care Unit (NICU) is a designated Level IV nursery for the Sacramento region. Its special care nursery is a Level II-designated unit for children who are seriously ill but expected to recover more rapidly.

Lewis-Truong’s blood pressure continued to rise at each prenatal appointment. On Thanksgiving morning, at 26 weeks, she dropped a urine sample off for testing.

The next morning, the lab called Lewis-Truong and said she needed to come in for a 24-hour observation at the hospital.

She was admitted with a blood pressure reading of 216/140, which was well above the normal range. She was told that, even though she did not have classic symptoms like a migraine or dizziness, she had preeclampsia and was at high risk of a stroke or heart attack.

Doctors tried to lower her blood pressure with medications, but at 27 weeks 1 day, they told Lewis-Truong that she needed to deliver her baby. She could not be induced because her blood pressure was so uncontrollable so doctors performed an emergency cesarean section.

“I was so worried and kept thinking 27 weeks was way too early, but I was in good hands,” Lewis-Truong said. 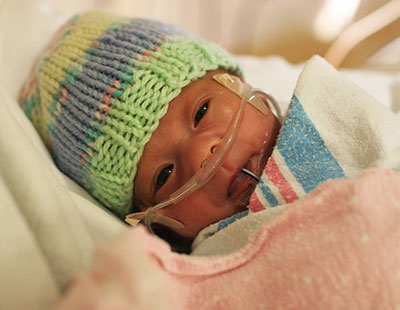 Celia’s mother was there every single day.

“It was so important to me that somebody saw and held her every day,” Lewis-Truong said. “We were told that the more we visited, the more she’d know we were there and the more she’d fight.”

And she fought. Celia was so aggressive in the NICU that she would kick or punch at the nurses whenever they drew her blood.

“We took everything day by day,” said Lewis-Truong.

Celia stopped breathing many times, had pneumonia twice and had four blood transfusions. The only surgery she needed was for an ovarian hernia.

“Celia had some of the complications of prematurity, none of them too severe fortunately,” said UC Davis neonatologist Francis Poulain. “Her main issues were lung immaturity and apnea of prematurity, a condition in which breathing repeatedly stops and starts. So she needed to remain on the ventilator for several weeks.”

“We were very lucky,” Lewis-Truong said.

Celia was three months old when she went home. She weighed 4 pounds 12 ounces and received both oxygen and medications for her lungs until she was six months old.

Once she was discharged from the NICU, Celia’s parents took her to the UC Davis MIND Institute for evaluation. She was developmentally delayed so she began physical and occupational therapy. Later, she participated in feeding and speech therapy.

Celia continues to exceed our expectations in terms of long-term outcome, as birth at 27 weeks gestation puts her at high risk for developmental delay, and having chronic lung disease increases that risk,” said UC Davis neonatologist Jennifer Scoble, who was involved with Celia’s follow-up care. 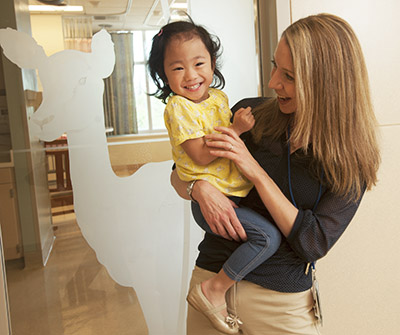 The MIND Institute followed Celia’s progress until her third birthday, as part of the Baby Steps program, which evaluates the development of all NICU patients for the first three years of life.

“At her last visit she scored in the typically developing range in all areas tested,” Scoble said. “The fact that she is doing so well is a testament to the love and dedication of her family. It has been such a pleasure to get to know them in the NICU and to follow Celia’s growth and development over the years.”

Celia is now “phenomenal,” said Lewis-Truong. She started talking at 9 months old and is learning English, Vietnamese and Spanish.

Each year on her birthday, Celia returns to the NICU to visit the doctors and nurses who saved her life.

“I hope her story helps other parents,” Lewis-Truong said. “I remember reading stories while Celia was in the NICU and it really gave me hope. UC Davis really saved me because a lot of things went wrong with my pregnancy, but I felt fabulous the entire time and didn’t know how sick I was. We’re very lucky. She’s changed our lives for the best.”