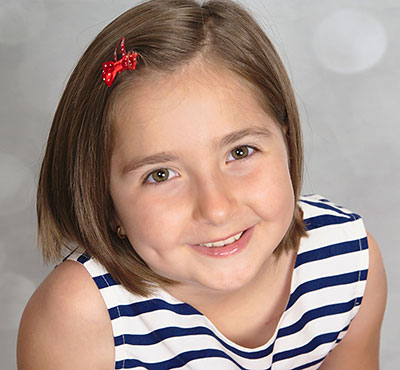 Karla Vatca had an ICD device implanted in her chest and, after recovering in UC Davis Children’s Hospital PCICU, recently celebrated her 8th birthday.

In May, then 7-year-old Karla Vatca was playing on the playground of her Antelope elementary school, near Sacramento, when she collapsed. Classmates witnessed her fall and two teachers, who saw that she was not breathing, began CPR.

When the ambulance arrived, emergency medical technicians (EMT) quickly diagnosed Karla with ventricular fibrillation, also known as Vfib, which causes the heart to beat rapidly and chaotically, without effectively pumping blood to the vital organs. The EMTs continued CPR and used an automated external defibrillator, commonly referred to as an AED, twice to shock the young child’s heart. This device helps to restore a normal heart rhythm and, coupled with effective CPR, improves survival from cardiac events such as this. Karla was then taken to a local hospital.

Karla’s mother, Angela, got the news at work. When she arrived at the hospital, she found Karla’s school principal and her husband, Vlad, crying.

“Vlad told me that Karla was put in a coma because we didn’t know how bad her brain was injured,” said Angela Vatca.

Although rare, long QT syndrome often presents suddenly in children. People with long QT syndrome seldom have any signs or symptoms. However, if someone does experience symptoms, it is most commonly fainting or seizures.

“The UC Davis transport nurses told us they would do everything they could, but right then, they didn’t yet know what was wrong with Karla,” Angela Vatca said.

Karla had not had any recent illnesses and had no congenital heart problems or sudden death in her family. Karla remained in a medically induced coma while UC Davis Children’s Hospital cardiologists worked to identify the cause of her cardiac arrest.

Karla was diagnosed with a heart rhythm disorder known as long QT syndrome, which causes chaotic heartbeats and can lead to fainting or sudden death. There may be no symptoms before an episode of ventricular tachycardia, a fast heart rhythm, or ventricular fibrillation, as in Karla’s case.

After Karla was diagnosed with long QT syndrome, she was taken for an MRI to help her physicians determine the extent of brain damage. One week after collapsing, Karla was awake in her pediatric ICU room, recognized her parents and was able to move her legs. Miraculously, she has no residual neurological deficits.

“When she was in the coma, we didn’t know how bad her body or brain would be,” said Angela Vatca. “Doctors kept telling us that she would have a long rehabilitation – if she would survive. After she woke up, she was able to do everything. They call her a miracle.”

Although often used interchangeably, a heart attack and cardiac arrest are not the same.

After rehabilitating in the ICU for two weeks, she underwent surgery for the placement of an implantable cardioverter-defibrillator (ICD), a device that delivers electrical shocks to the heart but is implanted internally within a patient’s chest. The device is designed to detect ventricular fibrillation and ventricular tachycardia and will shock the heart immediately to restore a normal heart rhythm. Karla is also on medications to reduce the risk of another episode.

Karla went home on May 23 and was back in school on May 25, less than three weeks from the day she collapsed. She spent the summer swimming, celebrated her eighth birthday and started third grade in the fall.

“The doctors and nurses at UC Davis did an extraordinary job taking care of Karla,” said Angela Vatca. “Their dedication and professionalism was outstanding. I don’t wish anybody to go through this, but we consider ourselves very fortunate that the UC Davis Pediatric Cardiac Intensive Care Unit helped us during the most difficult time of our lives.”

“I agree 100 percent,” said Vatca’s husband, Vlad. “There are no doubts in our minds that our little angel is alive and well due to the amazing care she received at UC Davis. We will remain grateful for their efforts for the rest of our lives because they gave our daughter back to us – the most amazing gift that somebody could ever give us.”

According to the American Heart Association, 424,000 adults and up to 6,000 children and adolescents may experience sudden cardiac arrest in the United States each year. 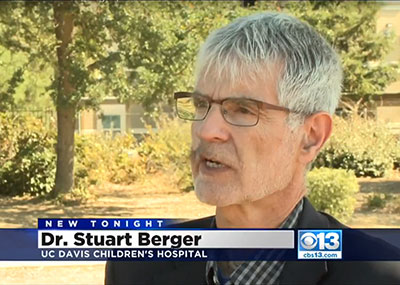 “Sudden cardiac arrest in children and adolescents is unusual, but it can occur,” said Stuart Berger, chief of pediatric cardiology at UC Davis Children’s Hospital. “When it does occur, it is incredibly devastating. It’s also very possible that they may not survive. Karla survived because CPR was started right away and they got an AED on the scene immediately.”

In 1999, Berger started Project ADAM (Automated Defibrillators in Adam’s Memory) in Wisconsin, named in honor of a high school basketball player who died on the court due to an undiagnosed heart problem. The national program aims to prevent sudden cardiac arrest in children and teens through education and life-saving programs, including expanding the availability of the automated defibrillators.

“The goal of Project ADAM is to put automatic defibrillators and teach CPR in every school,” Berger said. “In case kids – or adults for that matter – have an episode like this, the community can react quickly and potentially save a life. Having these programs in schools and the ability to intervene very quickly, before paramedics arrive, will give people a greater likelihood of survival. And, having every single student learn CPR prior to graduation will be a great step towards saving lives.”

Karla is one example of the benefit of having the community trained in CPR and automated external defibrillator.

“If Karla’s story can save lives by having defibrillators in schools, then we will be more than happy and our goal to help others through our experience will be achieved,” said Angela Vatca. “We know that every person’s life is precious just as much as Karla’s life is for us.”