Taking the guesswork out of concussion tests

Coaches and team physicians at all levels of sports play will soon be able to test athletes for possible concussions using low-cost, mobile tools being developed at UC Davis.

Khizer Khaderi, director of neuro-ophthalmology at the UC Davis Eye Center, has found a way to more objectively determine the likelihood of a concussion by measuring how athletes’ eyes react to specific tests that assess the eye-brain connection. 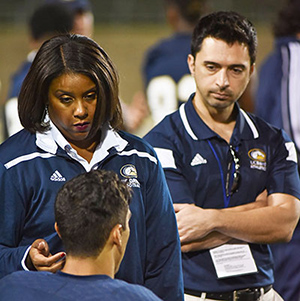 “Having been around children, and having nieces and nephews that play a lot of sports … this is a concern that’s near and dear to my heart,” he said. “I just want to help provide a solution that can allow them and myself to play sports, and to enjoy all the positive benefits of it, but to feel safe about it.”

“This is what I consider ground-breaking research,” said Melita Moore, head team physician for UC Davis Athletics and assistant clinical professor of orthopaedic surgery. “Right now, whatever an athlete tells me is what I have to go on with regard to concussion, because you cannot see concussion.”

Moore is principal investigator of a study that began this fall on the UC Davis football field to test athletes immediately after a sports injury to assess how their brain function compares to established norms.

It’s well known that returning to play too soon after a concussion creates risk of more serious injury or even sudden death. Currently, athletic trainers, physicians and professionals try to detect brain injury in players by having them take balance and cognitive tests prior to the start of the sport season, then taking the same tests at the time of injury. If the player performs poorly compared to his baseline test, then a concussion is suspected.

But existing tests are inadequate because a concussion diagnosis still relies partly on the self-reporting of players who may want to return to the game. The problem is they can fudge the results by purposely delivering a poor baseline test so that when an injury occurs, their results aren’t too different from their baseline scores. 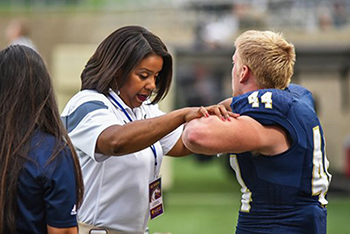 “Therein lies a really big problem, because you’re going to get people who are really hurt, but they’re competitors, and they want to go out there, but it may not be safe to do so,” Khaderi said. “Returning to play too soon after a concussion increases the risk of more serious injury and even sudden death from rapid brain swelling if the first concussion hasn’t had time to heal.”

Khaderi and his team have identified three tests that will run on a laptop or tablet platform and can greatly increase chances of accurate on-field assessment. One test gauges eye movement – which often slows after brain injury – and compares it against a baseline that’s harder for players to intentionally perform poorly on.

Another test measures pupil dilation and function via responses to image-driven psychological tests, rather than by classic flashlight-in-the-eyes techniques that can be skewed by background light. A third metric in the works measures brain waves, or EEGs.

“I wanted to create something that was cheat-proof. And to do that, I focused on eye movements and pupil response -- physiologic processes that you can’t cheat,” Khaderi said.

Measuring eye movement can be accomplished with a $100 eye-track instrument and a laptop or tablet. Khaderi hopes to package this test in a cloud-based software application, making it accessible to and usable bu coaches and team physicians at all levels of play.

“We wanted to keep this as cheap as possible in terms of making sure that we can get it into the hands of the people that need it,” Khaderi said.

A coach could use a flashlight to assess dilation, but background light can skew results. To combat this, Khaderi has adopted a psychological method called the International Affective Picture System, which uses pictures to make the pupil respond. Pupil size, which is under the control of the autonomic nervous system, can assess a wide range of psychological processes, including the health of connections between the eye and brain.

“Having been around children, and having nieces and nephews that play a lot of sports … this is a concern that’s near and dear to my heart,” he said. “I just want to help provide a solution that can allow them and myself to play sports, and to enjoy all the positive benefits of it, but to feel safe about it.”

UC Davis experts in physical medicine and rehabilitation, sports medicine and neuropsychology provide complete care for all forms of traumatic brain injury (TBI) — from mild to severe. Treatment plans are personalized based on the causes of the injury and specific symptoms. Call 916-734-6805 for information about sports-related TBI (including concussion) treatment and return-to-play evaluations or 916-734-7041 for information on non-sports-related TBI evaluation and treatment.