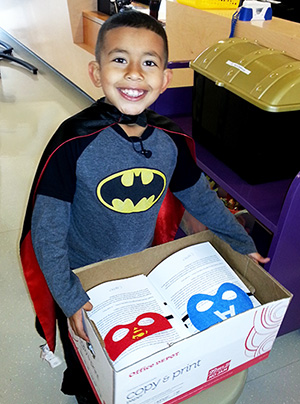 Sporting a Batman cape, former UC Davis leukemia patient had returned on his 7th birthday with reminders for the children undergoing treatments for cancer, sickle cell anemia and other childhood diseases.

“Be Brave!” he told each of child, handing them a package with a superhero cape and mask.

For Cooper, this mission was personal

Diagnosed with high-risk acute lymphoblastic leukemia in 2010, Cooper learned a lot about coping with a devastating illness. And now it was time to pay it forward.

“He had the worst of the two types of leukemia,” but endured his nearly four-year journey like a champ, remaining positive and joyful throughout both chemotherapy and radiation, said Cooper’s mom Cherie Trout. “We dubbed him ‘Cooper the Trooper.”

On his last day of chemotherapy, Cooper wore a superhero cape. He passed it on afterward to another child with cancer, Joaquin Hernandez, also of Woodland.

“When he heard that Joaquin was fighting for his life, Cooper said, ‘I want to give him my cape,’” recalls Joaquin’s mother, Marlene Hernandez. Joaquin was too ill for a visitor that day, but his parents draped the cape over him as he slept.

“I wanted him to wear it and be brave,” Cooper remembers.

Cooper hasn’t forgotten Joaquin and so, in addition to starting first grade, he persists in his effort, eager to raise funds to buy more capes and distribute them personally. He says he hopes that each child who receives a cape knows that it comes from someone who faced illness and beat it.

“I think it’s amazing what he’s doing to give back,” says pediatric oncology nurse Katie Haertle, who cared for Cooper as a patient.

"It's so inspiring,” says Anna Stark, whose son Fritz was recently diagnosed with leukemia and who received his cape from Cooper on Nov. 18. "To have little surprises like this really helps us get through this.”