An alternative to eyedrops for glaucoma patients 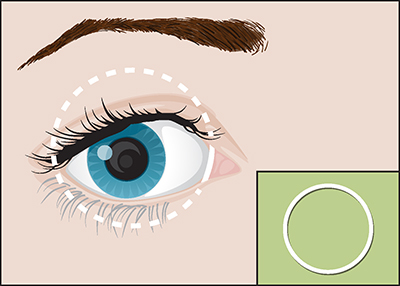 The flexible ocular insert is less than 29 mm in diameter, about the size of a half dollar, and releases drug to reduce intraocular pressure for up to six months for glaucoma patients. Phase 3 trials will be planned sometime in 2016.

For patients with glaucoma who do not remember or find it difficult to take their eyedrops as their physicians prescribe, the UC Davis Eye Center is investigating a novel insert that delivers time-released drug for up to six months, potentially eliminating the need for daily eyedrops.

The flexible, hoop-shaped insert rests on the surface of the eye and delivers drug to reduce high intraocular pressure in glaucoma patients. A small national study led by UC Davis Eye Center professor James D. Brandt, principle investigator of the Phase 2 clinical trial, found the insert to be both safe and well tolerated by participants. Brandt reported the results at the American Academy of Ophthalmology annual meeting Nov. 17.

Glaucoma is a group of eye diseases in which the normal fluid pressure inside the eyes slowly rises, leading to vision loss or even blindness. It is one of the leading causes of blindness in the U.S. and the second leading cause of blindness worldwide. While early diagnosis and treatment with drugs that lower intraocular pressure are highly effective at managing glaucoma, patients are often unaware that they have the condition, and often even when diagnosed, they have difficulty using eye drops properly.

“We know that a significant portion of patients struggle with taking their eye drops to lower intraocular pressure (IOP) consistently as prescribed by their physician, and inadequate eye-drop usage leads to vision loss.”
— James Brandt

“We know that a significant portion of patients struggle with taking their eye drops to lower intraocular pressure (IOP) consistently as prescribed by their physician, and inadequate eye-drop usage leads to vision loss,” Brandt said. “A well-tolerated, well-retained, topical, sustained drug-delivery system that provides clinically relevant IOP-lowering for six months would allow us to treat these patients in a meaningful way.”

The Phase 2 study assessed the safety and tolerability of the insert in 130 patients at 10 clinical centers nationwide. For the study, one group of participants received the ocular insert containing an intraocular pressure-reducing drug along with non-medicated eye drops taken twice daily. The other group took an ocular pressure-reducing eye drops (timolol) twice daily and received an ocular insert containing no drug.

Patients with the drug-containing ocular insert maintained reduced ocular pressure for the six-month study period, and had a 4 to 6 mm Hg reduction in ocular pressure at the end of the 12-week study period. The insert was also well tolerated by study participants, with approximately 90 percent retaining the inserts in both eyes for six months without clinician assistance.

A Phase 3 clinical trial with a significantly larger sample size is planned for 2016.

ForSight Vision5, a company based in Menlo Park, Calif., developed the time-released drug insert. The company is focused on developing non-invasive drug-delivery products that replace eye drops and provide sustained therapy for major eye diseases including glaucoma, dry eye and allergy. A Phase 3 clinical trial is planned for 2016.