Can interacting with horses help people with dementia?

At the Center for Equine Health in Davis, a group of horses have been interacting with an unlikely group of visitors ̶ people with dementia and their care partners. 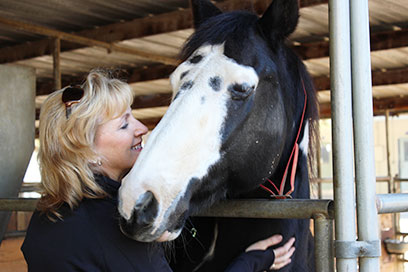 Can horse therapy improve quality of life in individuals with dementia? UC Davis study aims to find out.

The study aims to determine whether interacting with horses can alleviate problems including depression, anxiety, sleep disturbances and other challenges affecting quality of life of people with early-stage dementia or mild cognitive impairment. The collaboration among researchers at the UC Davis Alzheimer’s Disease Center, Center for Equine Health the non-profit Connected Horse also examines how the interaction with horses affect the caregivers.

Connected Horse co-founders Nancy Schier Anzelmo of Alzheimer’s Care Associates in Rocklin, who also serves on the faculty of the Department of Gerontology at Sacramento State University, and Paula Hertel of Senior Living Consult created the program. Their pilot study with Stanford University researchers found that participants showed improvements on several of the measures after three sessions with the horses.

Image alt: Horse therapy involves interacting with horses in a variety of ways, from grooming and cleaning hooves to observing them in the pasture. Image description: Man cleans the hoof of a horse as part of horse therapy program at UC Davis.

The study at UC Davis involved seven couples who participated in a workshop at the Center for Equine Health at the UC Davis School of Veterinary Medicine over three, five-hour sessions.

Specially trained facilitators led the participants in several activities in which each person interacted with horses, grooming them, cleaning their hooves, observing them in a herd and leading them in an arena.

After one participant noticed that a horse moved away and turned back her ears when she was brushed in a sensitive area, the participant got a softer brush and tried brushing a different area, for example. The horse responded by moving closer to the participant, dropped her head and began to close her eyes. Afterward, the participant shared how he became more aware of what the horse liked and did not like. 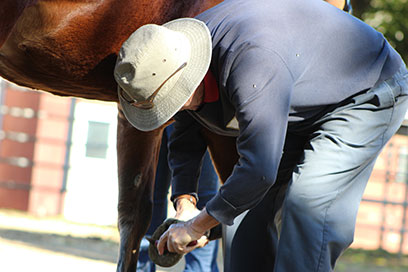 Man scrapes the hoof of a horse as part of the UC Davis horse therapy program.

Although data from the fall workshop at UC Davis have not been analyzed, program facilitators reported that participants seemed to benefit. One participant, for example, reported that the sessions made his partner smile and laugh, which she had not done in a long while.

Hertel said they hope ultimately to develop training to those who want to offer workshops to people affected by dementia, especially in areas where other community-based support services are scarce, and to collaborate with others to offer evidence-based programs nationwide so that equine-guided work becomes a more widely accepted support tool.

Organizers are now recruiting people with early-stage dementia or mild cognitive impairment and their caregivers for a second workshop at the Center for Equine Health at UC Davis, to begin in April. For more information about this research or enrolling in the study, call 916-708-4904.