There's an app for that

Hooman Rashidi is changing the game for medical students

Hooman Rashidi studies blood disorders and directs the residency program for the UC Davis Department of Pathology and Laboratory Medicine. But he didn’t begin his career in medicine. His first love was bioinformatics and computer programming—a fascination which took him on a course that married the two disciplines and resulted in must-have learning tools for medical students and residents. 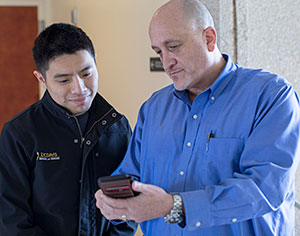 The newest item in his lineup of educational resources, HemeQuiz1, is a cutting-edge application focused on hematology assessment. It includes quizzes in more than 15 categories, quick references, and a game center that allows classmates to compete with one another while the app tracks the user’s progress. After only a few months on the market, HemeQuiz1 has become a top-selling hematology app.

Mark Jiang is a fourth-year UC Davis medical student who hopes to become a hematologist/oncologist. He uses Rashidi’s app regularly as a study aid during pathology and hematology/oncology clerkships and as a reference for hematology-related research projects.

“I have no doubt Dr. Rashidi’s app contributed to my success in medical school thus far,” Jiang said.

Rashidi developed HemeQuiz1 in response to requests for a self-assessment tool to correlate with Hematology Outlines, a website and app he created eight years ago with the help of several colleagues. Hematology Outlines serves as a comprehensive source for all things hematology, including a full atlas and glossary of terms with tutorials and detailed images. Hematology Outlines is now an integral part of the curriculum at medical schools and clinical laboratory scientist training programs and is recommended by the American Society of Clinical Pathology for board preparation in hematology. More than 250,000 users have accessed the resource.

“I have no doubt Dr. Rashidi’s app contributed to my success in medical school thus far,” Jiang said.

To build the new app, Rashidi collaborated with experts in pediatric and adult hematology/oncology and hematopathology. He tapped into his teaching skills and made it user-friendly by including a pause function for quizzes and two built-in randomizers that prevent users from memorizing answers. HemeQuiz1 is a standalone app, which allows students to study and physicians to reference it anywhere in the world without internet access.

“Dr. Rashidi’s enthusiasm for hematology and teaching really shines through, and I think his creation of the HemeQuiz1 app is just another manifestation of that enthusiasm,” said Jiang. “He is always exploring new ways to teach, and he is not afraid of getting his hands dirty in programming and app development.” 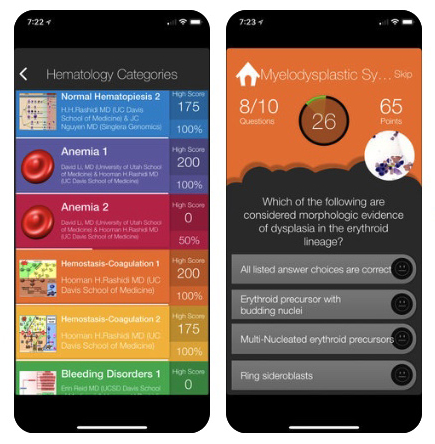 “All of our residents accepted high-level fellowships around the nation because of his unconditional support,” said Ghorbani. “I can't emphasize enough how we are blessed to have an amazing mentor like him who loves to teach and is so innovative.”

Faculty members find this app useful, too. Brian Jonas, a blood cancer specialist at the cancer center, helped write the acute myeloid leukemia (AML) section of the application and uses it himself as an up-to-date resource.

“Dr. Rashidi is an excellent educator and physician,” Jonas said. “It was an honor to participate in the development of the app with him.”

Still driven by a love of hematology and computer programming, Rashidi continues on a path of innovation. He’s now at work creating a digital hematology textbook with his own narration, illustrations and videos and plans to debut this new digital resource sometime next year.