Johanna Keys has survived some major transitions, including cancer, widowhood and, years ago, immigration to a new country. Those experiences made the 89-year-old Newcastle resident “pretty fearless,” she says, except when it comes to stroke — the condition that killed her father when she was very young. 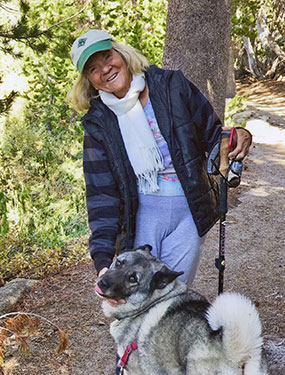 Johanna Keys is getting back to her regular exercise routine following a unique treatment for carotid artery blockage.

“The disability after stroke can be so life-limiting,” she said. “I really try to do all I can to prevent it.”

When Keys’ stamina suddenly declined, forcing her to cut her daily exercise routine in half, her daughter, a doctor, encouraged a checkup. She was right to be concerned. A vascular exam showed both of Keys’ carotid arteries — neck vessels that serve as the brain’s main blood sources — were blocked at levels that significantly increased the possibility of stroke.

“In my case, though, we think it was related to scar tissue from my radiation treatment for cancer,” Keys said.

She was referred to Matthew Mell, chief of vascular surgery and director of the vascular center at UC Davis Health. Mell was recently recruited from Stanford University, where he was known as a leader in treating complex arterial disease.

“There always is some risk involved with carotid artery treatment,” Mell said. “Until recently, our only options were surgery and traditional carotid stents. Both are effective but can also cause treatment-related stroke when blockages break up and end up in the bloodstream. TCAR gives us a safer choice.” 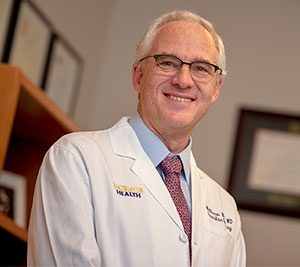 Vascular surgeon Matthew Mell is a leader in treating complex arterial disease and one of the first physicians in the region to offer TCAR to patients.

Mell was referring to transcarotid artery revascularization, a new technology with three major benefits over traditional carotid artery procedures. With TCAR, stents travel less distance, since the process begins with a catheter inserted just above the collarbone rather than the groin. While that is under way, a special device temporarily reverses carotid blood flow so material loosened during the process travels away from the brain to larger, lower extremity vessels. And, the part most convincing to Keys, it takes up to half the time of traditional procedures.

Keys stayed at UC Davis Medical Center overnight following her TCAR procedure in November, and then was released home where she was reunited with her dog, cats, children and grandchildren. She’s back to exercising every day — walking, swimming, yoga, tai chi and more — and returning to her typical endurance levels.

“I was beginning to think that every day might be my last,” Keys said. “But I am so very lucky. I have a competent and caring doctor in Dr. Mell.”

Transcarotid artery revascularization, or TCAR, is the newest approach to treating complex carotid artery disease offered at UC Davis Vascular Center, where patients receive state-of-the-art care for all forms of blood vessel disease. The center’s specialists are national leaders treating complex aortic conditions, and they are among the first in the Sacramento region to offer TCAR. For information, call the UC Davis Health Vascular Center Clinic at 916-734-3800.