Out of options, Bobby Hughes turns to a new treatment option at UC Davis Health

Bobby Hughes doesn’t complain much, but truth be told, he’s been clobbered, as his wife, Jerri says. The first shot was an aggressive lymphoma. Then he was hit with blood poisoning, bowel surgery, cancer recurrence, and finally kidney failure, from which he recovered. 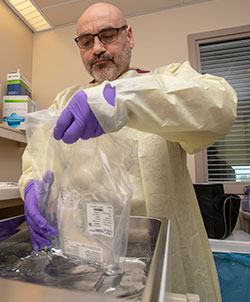 But on Thursday, Jan. 31, as he lay in a bed in the UC Davis Medical Center groggy but smiling, there was hope. Hughes had just become the first patient at UC Davis Health to receive a revolutionary new kind of treatment for diffuse large B-cell lymphoma – a one-time therapy that could put him into remission for good.

The treatment? His own white blood cells, engineered to become lethal weapons against the stubborn lymphoma cells that threatened his life. Called CAR T therapy (short for chimeric antigen receptor T-cell therapy), the approach is a new immunotherapy option for patients who have failed on chemotherapy and can’t have a stem cell transplant.

With Jerri at his side and son, Bobby Jr. at the foot of the bed, nurse Mike Chan slipped the precious little bag of opaque liquid onto the IV pole, and slowly it dripped through a line and into his bloodstream.

The health system’s preparation for this day began more than a year ago, as UC Davis Health was building its cellular therapy program. Accreditation, inspections, protocols and procedures, contingency plans and staff and physician training all needed to occur before the first patient received the treatment. UC Davis Health is the only system in the region that offers FDA-approved CAR T therapy for lymphoma, according to Kite Pharma, the Santa Monica-based company that developed the treatment. 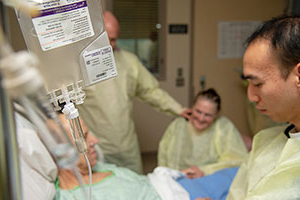 Patient Bobby Hughes, with his wife and son, during CAR T cell infusion.

For the 61-year-old Hughes, the journey began in May 2017 when a trip to a Bay Area hospital emergency room for stomach pain ended with a cancer diagnosis and six rounds of chemotherapy. A scan shortly afterward showed the tumors had vanished, but two months later the pain – and the tumors – were back.

This time, the chemotherapy treatment made Hughes very sick, and a subsequent Bay Area hospitalization resulted in a blood infection, kidney failure and surgery to remove more than foot of intestine.

Hughes, who lives in El Sobrante, then transferred to the UC Davis Comprehensive Cancer Center under the care of oncologist and blood cancer specialist Joe Tuscano.

Tuscano said Hughes is one of a minority of patients whose lymphoma is “refractory,” or resistant to treatment, and also unlikely to respond to stem cell transplantation.

“You can cure as many as 50 to 60 percent of patients with standard chemo,” he said. “And among those you can’t cure with chemo, some can be cured with a stem cell transplant. But some patients are either not good candidates for transplant or their disease is not amenable to transplant. Those are patients considered for CAR T.”

Patient is being monitored closely

With the prospect of a totally different approach to his unrelenting disease, Hughes’ outlook brightened.

“This is the last treatment,” he said. “Even if it doesn’t work for me, maybe they will find something out that will help someone else.”

CAR T therapy begins with collection of a blood sample from the patient and use of a machine to separate the T cells from other blood cells. The T cells are then sent to a laboratory where they are made into CAR T cells. That process, which takes two to three weeks, involves inserting the gene for the chimeric antigen receptor (CAR) into the T cells. The cells multiply in the lab and are then returned to UC Davis for treatment of the patient. Patients may be given low-dose chemotherapy prior to the treatment, which occurs with a single intravenous infusion of the modified T cells. Hughes is being monitored very closely in the hospital for any adverse effects of the treatment and will also have frequent outpatient checkups when he is discharged.

Tuscano said the UC Davis Comprehensive Cancer Center is now receiving many referrals for CAR T therapy from around the region, and he suspects the program will grow quickly.

“In addition, there will be many more indications for the treatment right around the corner – many kinds of blood cancers, and maybe even for solid tumors,” he said. For the Bobby and Jerri Hughes, their children and grandchildren, the future already is brighter. “I just know that everything that could have been done has been done,” said Jerri Hughes. “That makes me feel good.”