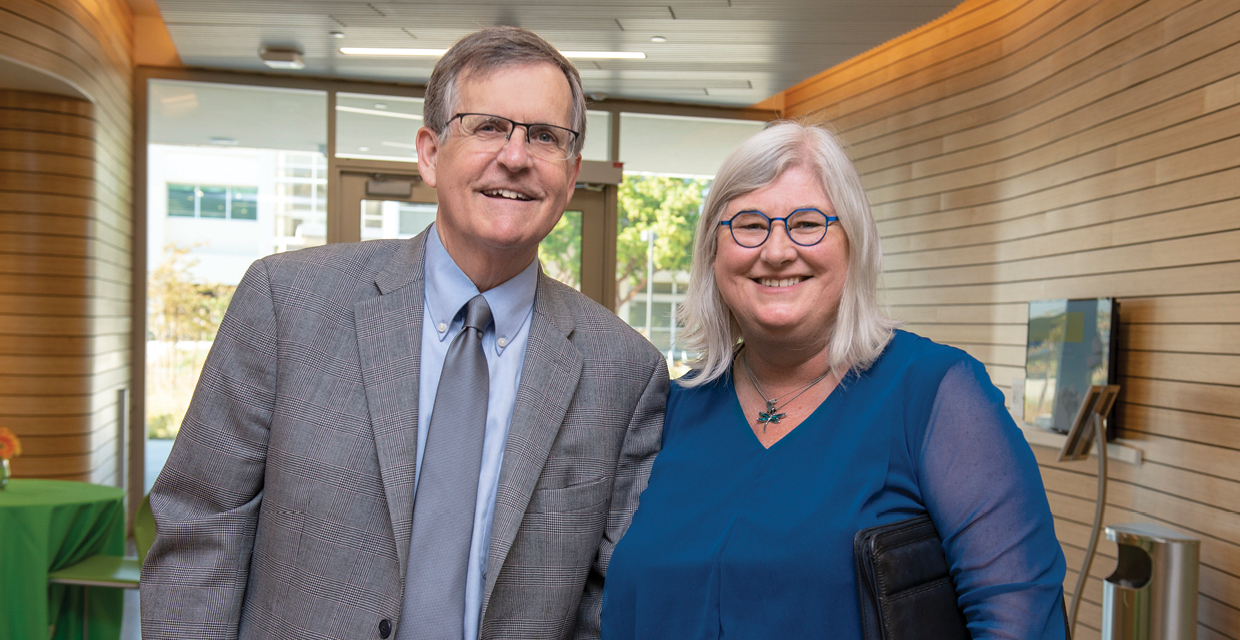 The co-champions of the Healthy Aging in a Digital World initiative are Tom Nesbitt, telehealth pioneer and emeritus UC Davis Health vice chancellor; and Heather M. Young, gerontology expert and emerita dean of the Betty Irene Moore School of Nursing at UC Davis.

The Healthy Aging in a Digital World initiative builds on UC Davis Health expertise and accomplishments in the leadership areas of co-champions Heather M. Young and Tom Nesbitt, such as: large-scale clinical telehealth services; a variety of connected-care and gerontology research projects; a structural emphasis on interprofessional collaboration; and extensive relationships in academia, health policy and industry.

In March, Heather M. Young announced her plans to complete her ten-year term as founding dean of the Betty Irene Moore School of Nursing at UC Davis and return after a sabbatical to contribute in a new way — championing research that aligns with her interests in family caregiving and healthy aging for older adults. Deborah Ward, the School of Nursing’s first recruited faculty member and its associate dean for academics from 2009 to 2015, was named interim dean.

Since its founding through a $100 million philanthropic commitment from the Gordon and Betty Moore Foundation — the nation’s largest contribution in support of nursing education — the School of Nursing has grown to encompass five graduate-degree programs, millions in research funding, and a ranking among the nation’s top 25 percent of master’s-degree nursing programs. Young and other faculty have lent expertise to a variety of national and regional initiatives — as have several graduates, in accordance with the school’s focus on creating leaders and change agents.

Technology plays a critical role in curriculum and research, with faculty and students studying concepts such as wireless monitoring for chronic-disease management and social networking applications for cancer care. Young herself led a $2.1 million effort to determine if innovative approaches, including mobile technology, can improve diabetes self-management.

Her extensive research also focuses on environments that promote healthy aging, with a particular focus on the interface between family and formal care systems. She was a co-founder, with AARP, the Family Caregiver Alliance and the United Hospital Fund, of the Home Alone Alliance.

Tom Nesbitt completed his second period as UC Davis Health’s interim vice chancellor for Human Health Sciences this summer, after helping to recruit David Lubarsky to the permanent position. Nesbitt initially served as interim vice chancellor and interim dean of the School of Medicine in 2013 following the departure of Claire Pomeroy, and returned after Julie Freischlag’s three years at the helm.

Nesbitt has worked relentlessly to improve conditions for rural physicians and their patients since his days as a family-practice physician in rural Idaho in the 1980s, and his leadership has placed UC Davis squarely at the national forefront of telehealth growth. He founded UC Davis’ telehealth program in 1992 with a tele-fetal monitoring link between Colusa Community Hospital and UC Davis Medical Center, and it has grown since to include a variety of innovative applications such as video-based consultations, store-and-forward services, emergency and intensive care consultation, teleradiology and telehome health.

As the founding director of the UC Davis Center for Health and Technology, Nesbitt has also helped oversee growth and implementation of statewide telemedicine programs for the UC Office of the President on behalf of the governor’s office. He’s heavily involved as well in UC-wide initiatives — such as the Center for Information Technology Research in the Interest of Society (CITRIS) — that create information technology solutions for society’s most pressing challenges.

The co-champions of the Healthy Aging in a Digital World initiative are Tom Nesbitt, telehealth pioneer and emeritus UC Davis Health vice chancellor; and Heather M. Young, gerontology expert and emerita dean of the Betty Irene Moore School of Nursing at UC Davis.

A publication for alumni,
donors, faculty and friends
of UC Davis Health Volume 15 • No 2 • Fall 2018