In translation: Taking on a formidable foe

Bladder cancer - facts at a glance

Doctors may be winning some fights against cancer, but have been losing the battle against invasive bladder tumors. Bladder cancer is not only becoming more common, but the mortality rate for patients is increasing as well. During the past five years, the number of deaths associated with bladder cancer each year has increased from 11,200 to 14,370. 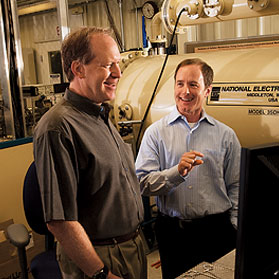 "We should have done much better," says Ralph deVere White, director of the UC Davis Cancer Center. "Bladder cancer should be among the most treatable of malignancies. The bladder itself is readily accessible to inspection and biopsy, making both diagnosis and treatment monitoring relatively simple."

The primary problem, says deVere White: a lack of funding. In 2008, the National Cancer Institute allocated $24.1 million for bladder cancer research, compared to $285.4 million for prostate cancer and $572.6 million for breast cancer. Yet the lifetime cost of treating bladder cancers is higher than for any other cancers. Its daunting 50 percent recurrence rate means years of follow-up surveillance and continuing treatment.

The majority of those who die from the disease have malignancies that have invaded the bladder muscle.

"If we want to lower mortality from this bladder cancer, we need to improve the survival of people with muscle-invasive and metastatic disease," deVere White says.

DeVere White and other urological oncologists developed a national clinical trial for patients with muscle-invasive tumors. They found that 40 percent of patients who received chemotherapy prior to bladder-removal surgery had no signs of tumor in their bladder after the surgery. The survival rate among these patients was 85 percent.

Their doctors aren’t ignoring the standard of care. Rather, they are all too aware of another grim fact: that half of all bladder tumors do not respond to drugs. Uncertainty about whether preoperative chemotherapy will help has made doctors reluctant to prescribe it, lest they subject patients to needless discomfort, expense and delays in tumor removal.

If deVere White and colleagues at UC Davis Cancer Center have their way, such treatment dilemmas will become a thing of the past. They are developing ways to predict which tumors will be most responsive to chemotherapy. Patients will benefit from treatments personalized to the susceptibilities of their particular tumor, and will be more likely to avoid ineffective treatments. These same techniques also will spotlight types of tumors that require additional research into new therapies. And what scientists learn from these studies will be applicable to other types of cancers as well.

A drop of treatment

More is not always better, goes the old adage. This could be the motto of UC Davis toxicologist Paul Henderson and molecular oncologist Chong-xian Pan. The two scientists are applying microdoses of drugs – amounts too small to cure or injure a patient, but enough to interact with tissues – to guide chemotherapy choices for individual patients. 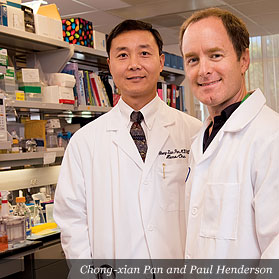 "It’s a whole new way to do cancer research. In addition to carboplatin, we will be able to apply this technique to plenty of other drugs and cancers."

For their proof-of-concept study, Pan and Henderson are studying how the chemotherapy agent carboplatin penetrates bladder cancer cells. Carboplatin binds to DNA at sites called adducts. This DNA damage triggers cells to self-destruct. Cells that are proliferating, such as those in malignant tumors, are the most likely to die.

For the study, the researchers have synthesized clinical-grade carboplatin from scratch using a heavy isotope of carbon. Bladder cancer patients will receive the drug a few hours before their bladders are removed in surgery. The amount of carboplatin they receive will be 1/100th of the dose used for cancer treatment. Toxicologist Ken Turtletaub of Lawrence Livermore National Laboratory will analyze the tumor DNA using an accelerator mass spectrometer. The instrument can count every heavy carbon atom bound to the DNA and, by extension, the amount of bound carboplatin.

"The higher the levels of adducts in a tumor, and the longer they last, the more likely the tumor is going to respond to chemotherapy," Henderson says.

All patients will then receive a therapeutic course of platinum-based chemotherapy. A database will track both their outcomes and their adduct numbers. Once data from all 85 patients in the study are collected, researchers will be able to determine which patients are most likely to benefit from the chemotherapy. The result: clearer guidelines for personalized bladder cancer treatment.

"This technology has the potential to identify resistant cancer before patients receive toxic chemotherapy," Pan says. "Furthermore, it may guide medical oncologists to design personalized chemotherapy to overcome chemoresistance."

Henderson, who also founded a company seeking to commercialize clinical microdosing studies with carboplatin, is enthusiastic about the new approach.

"It’s a whole new way to do cancer research," says Henderson. "In addition to carboplatin, we will be able to apply this technique to plenty of other drugs and cancers."

Already, Henderson and Pan are using the approach to improve veterinary care. Carlos Rodriguez of the UC Davis School of Veterinary Medicine is replicating the microdosing study with 20 canine bladder cancer patients.

Cells become cancerous because they are expressing genes that encourage unchecked growth. Scientists have been comparing the gene expression patterns in healthy and cancerous cells for years, with only limited results. More recently, researchers have discovered another mechanism involved in gene control: microRNAs. Each of these short snippets of nucleic acid can derail the production of hundreds of different proteins. 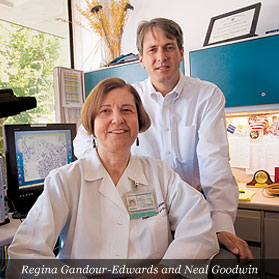 "It gives you the most humanlike lab tool to preserve and study these tumors."

UC Davis Cancer Center researchers Clifford Tepper and Ruth Vinall are comparing microRNA patterns in bladder tumors. They hope to use these molecular markers to identify tumors susceptible to chemotherapy. Previous work by UC Davis researchers and other scientists have identified microRNA signatures involved in prostate and breast cancer.

For their study, the scientists purified the microRNA from 30 bladder tumors and analyzed them with microarrays printed on glass slides. These microarrays can identify which of the 866 known microRNAs are present or lost in each tumor. Based on the microarray results, Tepper has been able to divide the samples into responder and nonresponder groups with approximately 72 percent accuracy. A number of the microRNAs in these profiles affect pathways controlled by tumor suppressor genes and oncogenes.

The scientists are now developing a set of microRNA markers that clinicians can use to identify patients who would benefit from chemotherapy. Eventually, these markers will help determine alternative treatment regimens for patients whose tumors don’t respond to current cancer drugs.

"This study is not just profiling of samples; its ultimate goal is to translate to a direct impact on patient care," Tepper says.

In a related study, the scientists are profiling microRNAs from tumors that already have resisted chemotherapy treatment. These tumors have their own unique set of microRNA signatures. By linking these microRNAs to gene expression, the researchers should be able to explain the mechanism responsible for resistance and to reveal new targets for chemotherapy.

The researchers plan to refine their marker system by increasing the number of samples in both studies. New technology is playing a pivotal role in their research. Both next-generation sequencing techniques and new computational methods are enabling them to better analyze microRNA levels and their influence on cancer gene expression.

A major factor limiting development of new cancer therapies is the availability of good animal models. While scientists can now grow tumor cells with ease in incubators, in vitro cultures lose many of their original cellular characteristics as well as the environment that encourages their growth.

UC Davis researchers are collaborating with JAX-West, a division of the nonprofit Jackson Laboratory, on a co-clinical trial of bladder cancer therapies. The research revolves around a rodent called the NSG mouse, which lacks major immune system components.

"For the first time ever we can engraft and study a tumor in the presence of the human extracellular matrix, which provides the cells and factors that help propagate this tumor in the human being," says JAX-West scientist Neal Goodwin. "It gives you the most humanlike lab tool to preserve and study these tumors."

UC Davis urological oncologists, together with pathologist Regina Gandour-Edwards, supply Jackson with tumor tissues from patients undergoing bladder removal at UC Davis Medical Center. The lentil-sized fragments are injected beneath the skin of multiple mice within an hour of their removal in the operating room.

"It’s a living bank of these patients’ disease that can be used for the foreseeable future," Goodwin says.

The researchers are treating the mice with chemotherapy agents to identify promising new drugs.

"For cancers that do not respond in the mice, we will bring them back into the laboratory and try to work out why they are not responding – to find their targets, treat them in the mice, and hopefully develop new treatments," deVere White says.

Goodwin also is analyzing gene expression patterns to identify salient markers for each type of tumor. Eventually, clinicians might be able to use this information to predict outcomes and identify the best treatment regimen for each person’s cancer – enabling doctors to turn the tide of the battle against cancer one healthy patient at a time.

Working with Oliver Fiehn, professor at the UC Davis Genome Center and a renowned expert in the field of metabolomics, and Robert Weiss, professor of nephrology, Koppie is collecting urine specimens from patients without bladder cancer, and from those with bladder cancer in various stages of the disease.

They are looking for small molecule biomarkers called "metabolites" secreted into the urine during the metabolic process that may indicate the metabolic pathways involved in the behavior of advanced tumors.

"All the processes we have now for detection are invasive," she says. "If we could detect cancer or its progression with a simple urine test, we could potentially detect progression of disease earlier, while decreasing the morbidity of bladder cancer care."

An expansion for the future

Taking on a formidable foe