Building on basics: A new tool for prostate, pancreatic cancers?

People Behind the Research

A researcher and surgical oncologist, Bold is an expert in pancreatic, hepatobiliary and breast cancers. He has implemented a number of minimally invasive techniques used in the surgical treatment of patients with various tumors.

The deputy director of the cancer center, Kung specializes in biological chemistry. He has been recognized for his significant contributions to understanding the role of oncogenes and growth factors in cancer.

Arginine deiminase, a novel drug for cancer, is like a saw to a carpenter who has had only a hammer, says Rick Bold, UC Davis chief of surgical oncology.

It is a tool that opens a new realm of possibilities for treating cancer and that is beginning to generate excitement nationwide.

Arginine deiminase triggers a function inside cells known as autophagy. A Greek term meaning "self eating" or "self digestion," autophagy may be a way to kill cancer cells very specifically, or in oncology parlances, very elegantly – that is, to kill them without poisoning or harming normal cells as current approaches do.

With its research using arginine deiminase, the UC Davis Cancer Center is at the forefront of this burgeoning field.

Autophagy was first observed decades ago, but wasn't paid much attention. More recently, however, the field has become so active it now has its own journal, called Autophagy.

Hsing-Jien Kung, a professor in the Department of Biochemistry and Molecular Medicine, is the lead researcher in the cancer center's autophagy work. He and his team first became interested in arginine deiminase because some cancer cells lack the enzyme necessary to make their own arginine, a semi-essential amino acid. That meant by removing arginine from systemic circulation, cancer cells could theoretically be starved while normal cells would remain functioning.

Studies sponsored by Phoenix Pharmacologics had shown that the drug was effective against liver cancer and melanoma when these two highly fatal cancers lacked the crucial enzyme. 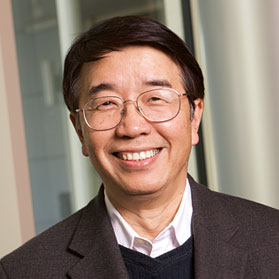 "Autophagy is a cell-protection mechanism. But we now realize is also a mechanism of cell death."

So, Kung, Bold and the others in their group began investigating whether other kinds of cancer also lacked the enzyme. They found two: prostate and pancreas, both types of cancer that also respond poorly to treatment other than surgery. Bold says that probably somewhere between 50 percent and 100 percent of these cancers lack the enzyme, and therefore might be susceptible to treatment with arginine deiminase.

At first, the group thought the cell killing occurred because starving the cells triggered apoptosis, a process by which cells self-destruct. But Kung had another hunch, recalling a research conference he had attended years earlier about autophagy.

Autophagy, he had learned, is a method by which cells recycle proteins and cell organelles. When autophagy is triggered, the cell forms a membrane around an old, unnecessary organelle or protein, as if collecting it in a garbage bag. Then, another type of bag called a lysosome comes along and injects digestive enzymes into the membrane to break down the contents and make the materials available to the cell again.

Kung learned that autophagy is often triggered when a cell is under stress and needs to hunker down and conserve its energy, as when it is starving. He also heard that autophagy can be a method by which the cell can survive stress, and that sometimes the process switches and becomes a way for the cell to destruct.

Kung realized that this process seemed to mimic the process observed when his group used arginine deiminase, and he figured that autophagy must be involved. It was then that Kung and Bold's work with arginine deiminase entered the exploding field of autophagy research.

"Autophagy is a cell-protection mechanism," Kung says. "But we now realize it is also a mechanism of cell death."

The group has since proven that autophagy is occurring in the cancer cells they treat. In fact, they have photographed the process happening – live – using technology developed by Frank Chuang and his colleagues at the National Science Foundation's Center for Biophotonics Science and Technology, housed on the UC Davis Sacramento campus. The researchers now know that the process of collecting the organelles into a membrane, the injection of enzymes and, finally, the release of membrane contents back into the cell cytoplasm takes less than 30 minutes.

The group also has done experiments that suggest that autophagy may be one reason cancer cells can be resistant to traditional chemotherapy treatment.

Kung says there are many mysteries yet to be unraveled about autophagy. Why, for instance, does it sometimes result in cell survival and sometimes in cell death? And how does that switch happen? His group is exploring those questions.

They also are interested in moving forward into the clinic.

Ralph deVere White, director of the UC Davis Cancer Center and a prostate cancer expert, says a new approach is critical for prostate cancer. Currently the five-year survival rate for metastatic prostate cancer is less than 30 percent, a rate that has not improved in the last 30 years.

"Autophagy gives us another way to attack this cancer," he says.

The arginine deiminase drug under study at UC Davis is owned by San Diego-based Polaris Pharmaceuticals. The company has been most interested in pursuing the potential of the drug in liver cancer, and has initiated trials in Asia, where liver cancer is much more common than in the United States. Those trials have demonstrated that the drug is safe and causes mild side effects, if it causes any at all, Kung says. 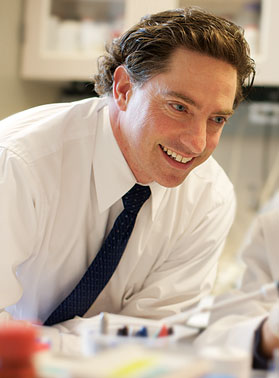 "The benefits have really been outstanding in the liver. Do we want to move it to clinical trials in pancreatic and prostate cancer? Absolutely. Now we have this whole new avenue open for cancer therapy."

Bold notes that patients diagnosed with pancreatic cancer usually live less than a year, and gemcitabine, the only effective treatment, gives those patients, on average, only another six weeks. He has put together a group of researchers to conduct a preliminary clinical trial of arginine deiminase in pancreatic cancer, a cancer rare enough that it usually requires a few centers to collect enough patients for an adequate trial. If fruitful, a trial in prostate cancer could follow.

Bold says the group has injected both pancreatic cancer and prostate cancer cells into animals and treated them with arginine deiminase, and it appeared to kill those cancer cells. But some tumors appeared to become resistant to the treatment. Because of that, Bold says that if arginine deiminase, or some other similar autophagy-related drug, is used routinely, it likely will be given with a traditional chemotherapeutic agent to provide a one-two punch.

"The benefits have really been outstanding in the liver," Bold says. "Do we want to move it to clinical trials in pancreatic and prostate cancer? Absolutely. Now we have this whole new avenue open for cancer therapy."

Autophagy may be key to cancer-cell death