Connections: Sarcoma treatment a model of team care for patients

"I would not have been in the clinical trial if I hadn’t gone to UC Davis."

Most cancer patients today face improved treatment options, especially those diagnosed with common malignancies such as breast or prostate cancer.

But it’s far more difficult for a patient with a relatively rare cancer such as sarcoma, which develops in muscle, bone, connective tissue or even in fat cells. Sarcomas are aggressive, and metastasize in about half of the 10,000 documented cases every year.

Jerrilee Griego was unlucky, and then very lucky. In September 2010, the retired businesswoman came to her primary care physician with a large lump on her thigh. Her doctor referred her to UC Davis. Here, physicians with different expertise work together to develop a coordinated therapy strategy. The specialist team meets with the patient to discuss options before deciding on the best treatment. Cancer center scientists also lead research to develop new therapies, such as drugs that enlist the immune system to attack cancer. And physician-scientists offer patients clinical trials of the most advanced and promising therapies.

Griego first met with UC Davis sarcoma specialist Robert Tamurian, who told her about a new clinical trial directed by his colleague Robert Canter, an assistant professor of surgical oncology. In addition to the conventional approach of radiation and surgery, Canter was testing the benefits of adding an anti-tumor drug called sorafenib, which had already proven effective against liver and kidney cancers.

By that time, Canter had good reason to believe the strategy could improve outcomes for patients with sarcomas that had not metastasized. Very early trial results indicated that the pre-surgery combination of radiation and sorafenib could greatly increase the rates of necrosis, or tumor death, compared to standard treatments. Griego, who lives in Diamond Springs near Placerville, agreed to participate.

"I would not have been in the clinical trial if I hadn’t gone to UC Davis," she says. "I knew they had the best cancer center in the area, and I was really pleased my doctor referred me here right away."

Canter says that the best strategy for treating sarcomas is a tight coordination between surgeons, radiation oncologists, medical oncologists, and sometimes vascular surgeons and other specialists. "Having all team members in one center is a great benefit. It may sound self-promoting, but our collaborations are seamless," he says.

As with any treatment decision, risks and benefits must be weighed. Most patients receive radiation treatment before surgery. But if a patient has diabetes or other conditions that can compromise healing, the team may decide to start with surgery, Canter says. On the other hand, a surgery-first strategy can increase the risk of mobility problems later. When specialists work in silos, collaborative approaches to determine the best course of treatment are less likely, and complicated cases can suddenly get more complicated. 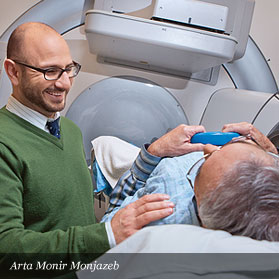 The cancer center offers patients a comprehensive treatment approach, in which physicians with different expertise work together to develop a coordinated therapy strategy.

"I come down to look at scans, and we discuss how we should map out the radiation," Canter says. "If he’s worried about an area of the tumor, we discuss if I’ll be able to take care of it with surgery. We’ve had a lot of very complex cases, and we’ve been able to offer what can’t be found in lots of places.

"Without our close interactions and meeting together to discuss our patients, much of what we have been able to achieve for our patients just wouldn’t be possible. This type of collaboration for a disease like sarcoma is not common."

Sarcomas usually develop in the arms or legs, Monjazeb explains. Using the collaborative approach, long-term local disease control can be achieved in more than 90 percent of patients. But for sarcomas that have spread to other parts of the body, treatment is limited to a regimen of chemotherapy, which has a poor success rate.

Because her sarcoma had not metastasized, Jerrilee Griego did well. Radiation and the clinical trial drug sorafenib killed about 95 percent of the grapefruit-sized tumor. Canter removed the large mass, and a year later, Griego is cancer-free. Since the tumor was so large, surgery cost her some muscle in her leg, but she’s back to enjoying her children and grandkids in Sacramento, and the short trips she and her husband like to take.

"I hope I’m home-free now," she says. "I knew the doctors were all working together, and since I was in a clinical trial, they were watching things closely."

Canter says that patients in clinical trials benefit in many ways. Their progress is monitored very closely, and outcomes are improved by 10 to 20 percent, even in early-stage clinical trials.

Richard Bold, chief of surgical oncology, sees the interactions between Canter and Monjazeb as a microcosm of how the cancer center’s comprehensive approach helps patients. "The transition from one type of treatment to another – say from radiation to surgery – can significantly affect a patient’s outcome. And it’s the pre-planning that makes it work, so you don’t have to change direction midstream. The likely outcomes are so much better if someone isn’t blindsided. This ability to work closely together has become a key part of our culture."

Monjazeb recently was awarded coveted support from the National Cancer Institute as a "K12 scholar," with funding for innovative research on a new approach to boost the immune system’s ability to attack the tumor and improve outcomes for sarcoma patients whose tumors have spread

Monjazeb is hopeful that his research, in collaboration with UC Davis cancer immunotherapy expert William J. Murphy, will lead to clinical trials to try to boost success of sarcoma treatment.

"I genuinely believe that in 10 years we will be able to cure many advanced cancers that are now seen as essentially incurable," says Monjazeb.

Richard Valicenti, chair of radiation oncology at UC Davis, says the interaction in the academic setting spurs new treatment development. "We’re committed to this team approach," he says. "Patients have a chance to be treated in a manner that really may be the way of the future."

Sarcoma treatment a model of team care for patients