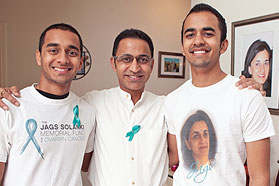 Ovarian cancer, long known as the "silent killer," actually speaks in whispers with symptoms women need to look for.

That’s the message the Solanki family of Elk Grove want to spread. The large, tight-knit family of Indian descent that immigrated to the United States from Zambia in 2000, lost its matriarch – 43-year-old Jagrati (Jags) Solanki – to ovarian cancer last year. Now, the Solankis have vowed to educate others about the quiet symptoms of the disease. In addition to launching an informative website about ovarian cancer – www.knowyourbody.info – the family has generously donated to the UC Davis Comprehensive Cancer Center, saying they believe the research going on there will save lives. They also donated to show their gratitude to UC Davis for the care Jags received there during her illness.

Jags was known as a compassionate fire-brand of a woman, a baker-extraordinaire who specialized in lemmingtons, a lemon cake coated in chocolate and coconut. Jags chaperoned her sons’ high school dances, where she was beloved by their classmates. Son Viraaj is now 20, and Heeral is 18.

"She was very tiny, but fierce," says Heeral, adding that when Jags volunteered at her sons’ schools, classmates would run up to her in the hallways to hug her. 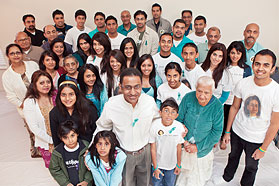 Dozens of supporters of the family participated, and family members lined the relay area with posters about ovarian cancer to educate people about its symptoms.

Jags was a giver in many ways. She volunteered with her family each year in the Relay for Life in Elk Grove to help raise money for the American Cancer Society’s fight against cancer – well before her fight against the disease became personal.

In October 2010, the bloating, indigestion and abdominal pain Jags had experienced for weeks became more acute. Her husband, Udaysi, insisted that she see a gynecologist. Several tests and a surgery later, the family was given the devastating news that Jags had stage 3C ovarian cancer. Jags endured chemotherapy and other treatments, but her cancer was too advanced. She died Feb. 19, 2011, with more than 20 friends and family in the hospital waiting room saying prayers for her.

In retrospect, Udaysi says the symptoms of the cancer were there, but the family was not familiar with ovarian cancer and its signs.

"We have a family filled with doctors and nurses, and if we didn’t know, how will anyone else?" Udaysi asks. Leiserowitz taught them that contrary to popular belief, ovarian cancer does have detectable symptoms – the bloating, pelvic pain and feelings of fullness. "His message is – ‘It’s not silent. It whispers. Listen to those whispers,’" says Udaysi.

The Solankis want to get the word out. Their public awareness campaign started at the last Relay for Life at Elk Grove High School. Dozens of supporters of the family participated, and family members lined the relay area with posters about ovarian cancer to educate people about its symptoms.

But the Solankis wanted to do more. They organized a fundraiser gala and golf tournament last September to raise money for the Jags Solanki Memorial Fund for Ovarian Cancer, a non-profit organization they have established.

"Our goal was – if we break even, at least we got our message out," says Ranchhod. The family shattered their goal, raising enough money to donate $35,001 to the UC Davis Comprehensive Cancer Center.

"In our culture, when we donate money, we never end the donation in a zero," explains Udaysi Solanki. "The $1 shows it shall continue."

The golf tournament and gala will be an annual event for the Solankis. This year’s Golf & Gala event is Sept. 2. Event information can be found at www.knowyourbody.info. "We want no family to go through what we went through," Ranchhod says of their motivation.

Lemmingtons were not served at the fundraiser, and there is a simple explanation as to why.

Explains Heeral Solanki: "No one knows how to make them as well."