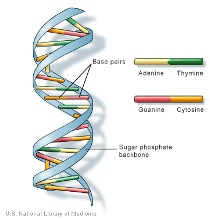 You may recall from the Genetics Overview that human beings have 23 pairs of chromosomes in our cells and that each of our parents contributes one chromosome to each pair. The gene that causes HD is found on chromosome 4.  Each of us gets one copy of the gene from our mother and one copy from our father.

Like all genes, the HD-causing gene is made of DNA, a molecule with a twisted double helix structure. You can imagine it as a twisted ladder, as shown in the picture at the right. DNA is made from a sugar phosphate backbone (the sides of the ladder) combined with pairs of nitrogen bases that hold the two sides together (the rungs of the ladder).

These bases have names: Adenine, Thymine, Guanine, and Cytosine. The gene responsible for HD contains a sequence with several CAG repeats (Cytosine, Adenine, Guanine). We all have these CAG repeats in the gene that codes for the huntingtin protein, but people with HD have a greater number than usual of CAG repeats in one of the genes they inherited.

Although different sources vary slightly in describing the significance of CAG repeat numbers, the following explanation is based on information from the well-respected genetics website, Gene Tests:

The number of CAG repeats you have gets determined at conception and is not expected to change over time. However, the gender of the parent you inherit an HD expansion from may play a role in determining the number.

This is significant because the number of CAG repeats plays a role in the age of onset. In general, the higher the number of CAG repeats, the earlier the onset -- although exceptions occur regularly so this is only a general guideline. Other genetic and non-genetic variables also contribute to the complex issues that determine the age of onset and severity of symptoms.

For more information about HD genetics and testing, please see the following pages: