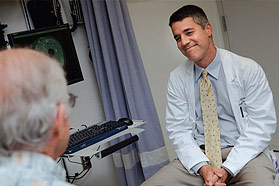 A 32-year-old husband and father of two young children is nearing the end of his battle with gastric cancer when he develops a bowel obstruction.

If he were healthy, his doctor would not hesitate to recommend immediate surgery to relieve the blockage. The fact is, however, that his disease makes surgery more risky. The man not only risks death, but complications that could reduce the quality of the time he has left to spend with family.

But, just how much riskier is this kind of surgery for late-stage cancer patients than for otherwise healthy ones? Until now, doctors caring for cancer patients with fewer than six months to live could not say. A new decision-making tool developed by a team led by UC Davis Cancer Center surgical oncologist Robert Canter allows physicians to calculate patient-specific risk of dying due to complications from the surgery, based on variables associated with their disease.

"We assume that these patients are at higher risk, but no one has ever defined how risky some of these common surgical procedures are for the individual late-stage cancer patient," says Canter.

The new nomogram offers physicians and others on the patient’s health care team solid numbers they can use in making their decisions or recommendations.

To address this need, Canter and his colleagues developed the first comprehensive tool to guide physicians and their patients in deciding whether surgery to treat an acute problem is the best option, based on the risk of complications or death within 30 days after the proposed operation.

In June, they published a paper in the Annals of Surgery describing the tool, called a "nomogram." The tool allows physicians to input patient information, such as clinical diagnoses, symptoms and laboratory test values, to determine an individual patient’s risk of surgical complications, or death.

"If you knew more precisely what their risks were, it would affect a physician’s discussion with the family and ultimately the decision of whether or not to opt for surgery," Canter says. 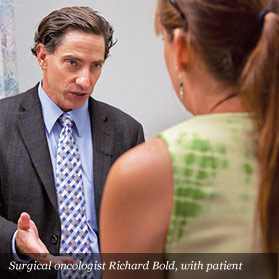 Improving the quality of care for late-stage cancer patients means helping them through one of the most difficult transitions they will face: the change in their health-care goals.

The new nomogram offers physicians and others on the patient’s health-care team solid numbers they can use in making their decisions or recommendations. Patients and families may or may not see or hear these exact numbers, but doctors will now be able to tell them with more certainty whether a surgery poses low, medium or high risk.

A nomogram is like a calculator physicians can use to come up with a patient- and surgery-specific number that describes the risk of dying within 30 days.

To construct the nomogram, Canter and colleagues at UC Davis Cancer Center identified 7,447 patients with widespread cancer from data collected between 2005 and 2007 by the American College of Surgeons’ National Surgical Quality Improvement Program. They focused on those patients who had experienced a complication and on their post-surgery outcomes.

Researchers created a statistical formula, or risk calculator, that utilizes 53 variables describing the patients’ pre-operative condition to determine the rates of complications and mortality for individual patients. 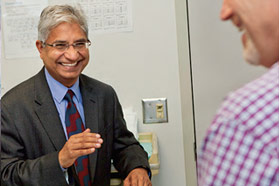 In the published paper, the researchers cite the hypothetical example of a 70-year-old with metastatic lung cancer admitted to the hospital with an obstructed intestine. In this case, the patient has lost more than 10 percent of his weight within the past six months, has difficulty breathing with moderate exertion, has poor kidney function and advanced malnutrition. After entering that information into the risk calculator, doctors determine that the patient has a 30 percent risk of dying and 40 percent chance of other complications within 30 days of the surgery.

Armed with these kinds of numbers, a physician can have a well-informed discussion with everyone who is caring for the patient before approaching the family to have a conversation about the patients’ options, says Frederick Meyers, executive associate dean for the UC Davis School of Medicine and a co-author on the nomogram paper.

"This is about improving the quality of care for patients with cancer," he says.

"It’s up to us to take the next step and develop education programs and use technology to help people really understand how to use our nomogram."

Meyers has been treating cancer patients for 28 years. He says he has seen a shift in the way both physicians and patients approach interventions toward the end of life.

"In the old days, doctors would have said, ‘Let’s just do it because there’s nothing else I can do.’ These days, more and more doctors and patients understand that supportive, or palliative care, is an important option compared to an ill-advised intervention such as surgery."

Still, advising someone against surgery is not easy for a physician, or a patient. "This is not about abandoning our patients," Meyers says. "It’s about understanding their needs. We don’t want to do anything that is dangerous for them."

Improving the quality of care for late-stage cancer patients means helping them through one of the most difficult transitions they will face: a change in their health-care goals.

"The question is how do we help patients make an important transition in their course of care from disease-directed treatment and palliative care to palliative care alone?" Meyers says.

The nomogram will help physicians explain to patients with high-risk scores that the time may have come to make that transition and explore non-surgical options to relieve their acute situation.

In the hypothetical case of the young father with gastric cancer, the man chooses to have a stent placed in his intestine to allow passage of food – instead of the complicated surgery. He gains little time past the six months he had been expected to live, but a week before he dies he enjoys a visit from an old high school friend who notes later that his friend had seemed happy. He soon suffers a stroke, and four days later he dies. Canter says surgery might have meant painful complications or untimely death, and that the less invasive care allowed the man a more graceful end of his life.

Now that the nomogram has been created, the researchers who created it are working to establish methods for teaching their colleagues both at UC Davis Health System and beyond to use it.

"It’s up to us to take the next step and develop education programs and use technology to help people really understand how to use our nomogram," Meyers says.

Canter, who already uses the nomogram when caring for his patients, says he will continue to refine it by using other large sources of patient data.

"We want to make sure it’s as accurate as it can be and actually helps people make these difficult decisions."

Canter and his colleagues also will be conducting additional studies to evaluate how surgery, when it is chosen and does not result in death, impacts quality of life.

"If a patient has complications, it could make their last few months with cancer worse," he says. "That’s not what we want."

Knowing when to opt out