In translation: Creative hi-tech tools draw in teens and young adults with cancer

Beginning in January 2012, the AYA Cancer Advisory Board will oversee the new UC Davis Cancer Center YourSphere parent-approved social networking website for children on the Web, providing content, contest ideas and launching a new "Cancer Buddy" Program where adolescents and young adults will be trained to be mentors for children diagnosed with cancer. For more information, contact Marlene von Friederichs-Fitzwater at marlene.vonfriederichs-fitzwater@ ucdmc.ucdavis.edu or call her at 916-734-8810. 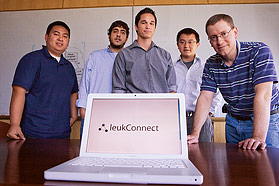 When Marlene von Friederichs-Fitzwater was diagnosed with cervical cancer as a young adult, she felt afraid about how the illness might affect her life. But there was more.

"Probably the worst part of the experience was that I felt completely alone," says von Friederichs-Fitzwater. "I didn’t know anyone my age with cancer and felt totally isolated from my peers."

Remembering those days more than 25 years ago, von Friederichs-Fitzwater, director of outreach research and education and assistant adjunct professor at the UC Davis Cancer Center in the Division of Hematology and Oncology, is particularly mindful of the special needs of teens and young adults as she develops, tests and implements new programs for patients with cancer.

Young adults may be less likely than older adults − or children with parents to watch over them − to monitor their illness carefully or comply with their treatment regimen.

The age group of 15- to 39-year-olds is unique in many ways among cancer patients. Most do not feel they have much in common with other patients in either pediatric or adult clinic waiting rooms, hospital wards or cancer support groups. Groping with issues such as independence, sexuality, fertility, new careers and young children, they have much on their minds beyond prognosis and treatment questions.

Young adults may be less likely than older adults – or children with parents to watch over them – to monitor their illness carefully or comply with their treatment regimen. And as von Friederichs-Fitzwater well remembers, they do not often reach out for support.

"We need to be more creative in giving this age group full access to the resources they need," says von Friederichs-Fitzwater. "There’s a lot of technology that kids and young adults are already using, and we can exploit it for more than playing games."

Conferring with an online coach

Von Friederichs-Fitzwater, along with Frederick Meyers, executive associate dean of the UC Davis School of Medicine, recently developed and tested a novel Web-based educational intervention called I-COPE to coach young adults with cancer in problem-solving and coping skills. The patient sits in front of a computer screen and has a conversation with a life-like person who has been programmed with a personality and knowledge bases.

Although many people of older generations may squirm at the thought of having a conversation with a computer-programmed human-looking character, von Friederichs-Fitzwater points out that the system actually offers many advantages over receiving health education from a real person.

The demonstration program proved so popular with the young testers that more than three-quarters said they would prefer to receive information from such a system than from print media or even face-to-face encounters with a real person.

"This guarantees that a consistent and complete message is delivered to every patient," she says. "And unlike a real person, our character never has an ‘off-day’ and always interacts positively."

Meyers agrees that the system offers many advantages.

"The beauty of this technology is that it can be tailored to each patient’s needs," he says. "And it can be used by patients who are isolated – both physically, such as those living in rural areas, and emotionally, such as those who have a hard time reaching out to another person."

The demonstration program proved so popular with the young testers that more than three-quarters said they would prefer to receive information from such a system than from print media or even face-to-face encounters with a real person. They requested that such programs be developed that deal with a variety of issues on their mind: reproduction, emotions, communicating with health professionals, and risks and benefits of treatment options.

"It’s amazing how well this technology is received," says von Friederichs-Fitzwater. "In hospitals where they use similar technology for giving discharge instructions, patients actually have called the hospital some days later and asked to speak to the virtual ‘person’ for more advice."

Getting connected with a phone app

When a group of UC Davis biomedical engineering students were looking for a senior design project, von Friederichs-Fitzwater was ready with an idea especially aimed at young cancer patients − a cell phone application that would link to the Web-based program.

"What if we could use cellphone technology to help patients monitor their condition more effectively and at the same time provide information to their doctors?" she wondered. 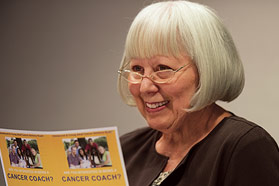 "We need to be more creative in giving this age group full access to the resources they need. There’s a lot of technology that kids and young adults are already using."

The team of students, Meric Ozturk, Steven Pham, Phillip Schaecher and James Tan, jumped at the idea and took off running. Under the tutelage of their advisor, Anthony Passerini, assistant professor in the Department of Biomedical Engineering, they created a device that can take data from a patient’s "point of care testing" device, such as a home glucose monitor, and transfer the information through a cell phone to a web application, which in turn sends it to an electronic medical record system.

At that point, the information can be used in a variety of ways: the physician can receive live updates on how a patient is faring; the data can be graphed over time so that a physician and patient can monitor progress; and the patient can be contacted with additional information or instructions.

Most importantly for many young people, the non-medical information can be shared via the phone app with friends, family members and other patients on the network who also have cancer.

"We’re all addicted to Twitter, Facebook and texting," says Pham, who along with the other students would be graduating in only a few weeks with a Bachelor of Science degree at the time of the interview. "This cell phone app is a natural extension of those social networking capabilities − a way for cancer patients to have their own support group that is informed and there to help." 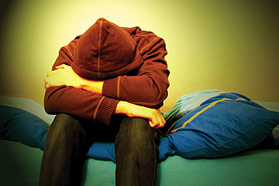 "The beauty of this technology is that it can be tailored to each patient’s needs. And it can be used by patients who are isolated – both physically, such as those living in rural areas, and emotionally, such as those who have a hard time reaching out to another person."

Enthusiastic about their prospects, the research team considered founding a Silicon Valley startup with their technology. But the students realize that many steps are needed before making their project available to cancer patients, including ensuring confidentiality and testing the application with actual patients.

Their professor, Passerini, is clearly impressed. "Most importantly, there is plenty of opportunity to expand the technology they developed," he says. "They are designing for an emerging reality."

"I would have loved to have had such capability when I was struggling with cancer," says von Friederichs-Fitzwater. "If I had been given the opportunity to share the experience with friends, family and, most importantly, other young adults with cancer, it would have made all the difference."

Reaching out to a challenging age group