Oncologist May Cho’s patients share their stories. Their journeys, at times long and confusing, are a testament to the importance of colon cancer screenings and advocating for your care. Their positive outcomes provide hope for younger adults diagnosed with colorectal cancer.

“Don’t let anyone tell you that you are too young”

Teri Rivera, symptoms at 43, diagnosis at 51 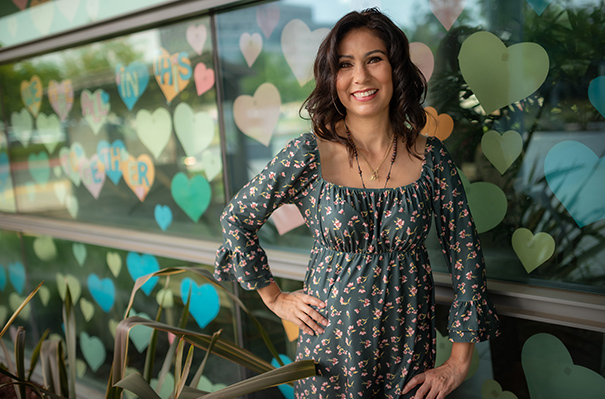 It started eleven years ago. Teri Rivera, then age 43, began noticing blood after using the bathroom. For years, she was told the blood was due to hemorrhoids, which seemed a likely diagnosis for the young mother of five.

But Rivera sensed that something was not right. “Remember that you know your body best,” she said. “If you don’t like the answer you’re getting, keep asking questions and get a second opinion.”

Not until almost seven years later, in July 2016, a primary care provider suggested a colonoscopy, a common procedure that can screen for colorectal cancer. Within the year, Rivera was diagnosed with stage III colorectal cancer. She was 51.

At stage III, colorectal cancer may have spread to nearby lymph nodes but not yet spread to other parts of the body.

Rivera wanted her treatment to move more quickly. A colleague and friend encouraged her to go to the UC Davis Comprehensive Cancer Center, where the friend’s father had received excellent care.

Just a few weeks later, Rivera received a call from UC Davis. “They reached out to me!” exclaimed Rivera. “Within the week I was meeting with Dr. Cho.”

A tumor board, a group of cancer specialists to reach an opinion on how to handle a case, immediately reviewed Rivera’s case. She was set to start chemotherapy within two weeks, followed by radiation therapy and surgery.

Three patients in their 30s and 40s struggled searching for a diagnosis and treatment until they found UC Davis Comprehensive Cancer Center.

“Dr. Cho explained everything to me, and how it was going to work,” she said. “It was the quickest response I had ever received since the time of my diagnosis.”

In December 2017, Rivera received excellent news: “Your cancer may have been over-staged. It looks like you have a stage II cancer.”

Rivera would not need radiation. Her treatment consisted of surgery followed by a round of chemotherapy.

“There have been some difficult ups and downs, but I was treated by a very thorough, understanding, caring and supportive team at UC Davis. I am happy to say that currently I have no indication of cancer,” she said.

She is grateful for the support of her five children, now ages 14 to 32, and other family and friends while going through treatment. For others finding themselves with a cancer diagnosis, she encourages them to be an advocate for their own care.

“So young to face something so heavy” 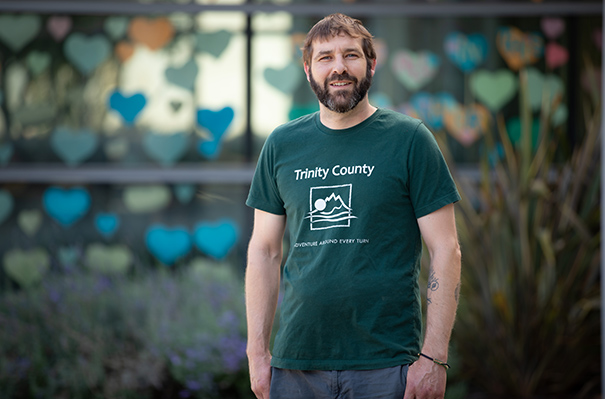 Neil Petersen was an avid backpacker and naturalist living in Weaverville, a remote part of Northern California.

At 36 he was close to realizing his dream of opening a brewery when his life changed in early 2018.

Petersen was rarely sick, but some flu-like symptoms prompted him to go to a clinic for help. He was given some pain medicine and did not pursue further care. However, the symptoms returned a few months later, along with pain and trouble urinating. He drove himself to the nearest emergency room, which was 45 minutes away.

After a CT scan he received sobering news: he had a mass in his colon. “I was hospitalized immediately,” said Petersen. “The doctors started talking about options, including a colostomy bag and palliative care. I thought, ‘Let’s slow down.’ I was aware that they did not have a cancer program.”

Petersen immediately knew that he wanted to be at the UC Davis Comprehensive Cancer Center. Having grown up in the Sacramento area, he knew about its positive reputation, and his parents still lived in the area. He went to the emergency department at UC Davis Medical Center and was immediately admitted to the hospital based on his condition.

That’s where he met Cho. She told Petersen that his tumor had grown from his colon into his bladder, blocking his ability to urinate. In October 2018, Petersen was diagnosed with stage IV colorectal cancer with metastasis to the liver.

“I was so young to face something so heavy,” said Petersen.

His treatment included initial chemotherapy and then surgery, which was scheduled right after Christmas followed by groundbreaking immunotherapy monthly treatments that enable the body’s immune system to fight the cancer cells.

Petersen also praised the holistic care offered at UC Davis. He was fortunate to have support from UC Davis social worker Sara Conning. “It helped keep my brain straight through this complex roller coaster that I had been on,” he said.

Petersen finished his treatment in May of 2020 and is in remission. He will soon return to UC Davis for a robotic colostomy reversal by Wissam J. Halabi, a surgeon trained in general surgery and colon and rectal surgery. He encourages anyone who experiences symptoms like his to request a colonoscopy.

At the time of Petersen’s cancer diagnosis, he and a business partner had just closed escrow on a building that would house their new brewery. “Dr. Cho told me to let her worry about the cancer and for me to worry about starting my brewery,” he recalled. Trinity County Brewing Company opened in May 2020!

“Be bold and unapologetic” 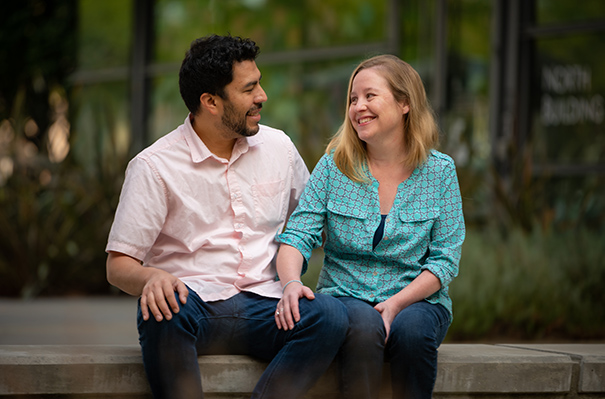 Jennifer Dunn was having excruciating stomach pains, and she couldn’t find relief.

“The pain was so intense,” said Dunn. “I started seeking treatment in as many places as I could.”

Her journey included multiple visits to various health care providers. Dunn was a teacher living in Humboldt County, California, a rural area where doctors sometimes rotate through their services, making it challenging to obtain specialty care.

“It was always someone different — a health care professional meeting me for the first time, and we’d be starting from zero again,” she said.

Dunn was 39 years old. Due to her young age, the possibility of a colon cancer diagnosis was overlooked for more than a year.

In 2019, two months after her 40th birthday, she made what would be a critical visit to the emergency room.

“It became very hard to trust my own body. The long ordeal had drained me of my confidence,” she said. “It was desperation that helped me refuse to budge that day until more was done.”

Finally, a CT scan identified multiple lesions occupying 70% of her liver. Later, a biopsy confirmed that her disease was very advanced.

I didn’t know oncologists pick up the phone and call! I was so surprised.Jennifer Dunn

Dunn thought of her daughter, who was just 9 years old at the time. “There has to be options,” Dunn thought.

Her brother, a professor of evolutionary biology at Yale, searched for a place for her to receive better care and was recommended the UC Davis Comprehensive Cancer Center.

Soon after setting an appointment, Dunn received a call from Sepideh Gholami, a UC Davis surgeon-scientist specializing in cancers of the gastrointestinal tract, liver and pancreas.

“I didn’t know oncologists pick up the phone and call! I was so surprised,” said Dunn. “I had gone from feeling like a ghost, going around asking everyone I could to help me find care, to — finally! — this team that opened their arms. It was a totally different relationship.”

When Gholami learned of the severity of the colonic obstruction, she immediately sought out UC Davis surgeon Wissam J. Halabi. From there, things moved fast: Dunn’s tumor was removed within 24 hours. She stayed in the area to recover before returning to Humboldt. Oncologist May Cho oversaw Dunn’s chemotherapy regimen.

In April, despite the COVID-19 pandemic, Dunn and her family relocated to Sacramento to be close to the cancer center. Dunn’s husband secured a job teaching and her 10-year-old daughter is distance learning with her elementary school in Humboldt County.

Dunn is participating in an innovative treatment for patients with colon and bile duct cancers, in which chemotherapy is delivered both systemically and directly into her liver. She is one of the first patients to undergo the treatment at UC Davis.

By sharing her experience, Dunn hopes to make a difference in someone else’s life.