Two female UC Davis Comprehensive Cancer Center researchers conducted new studies that examined the risk factors and the right treatment for breast cancer, integrating race and ethnicity considerations into their work. The studies were published in recent issues of Cancer Epidemiology, Biomarkers & Prevention, a journal of the American Association for Cancer Research.

Study #1: Is being overweight or having dense breasts a risk factor for breast cancer, regardless of race or ethnicity? 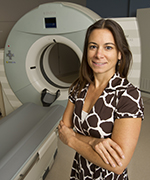 The study was the first to directly investigate and report important racial/ethnic differences regarding the risk of breast cancer associated with body mass index (BMI) and breast density among premenopausal and postmenopausal white, Black, Hispanic and Asian women. BMI reflects body weight adjusted for height. Women with a BMI over 25 are considered above normal and overweight.

The research appeared in the October 2020 issue of Cancer Epidemiology, Biomarkers & Prevention and found that a BMI in the overweight or obese range and dense breasts accounted for a large proportion of breast cancers in white, Black, Hispanic and Asian women despite large differences in the prevalence of these risk factors across these racial/ethnic groups:

Sustained weight loss in women over 50 has been shown to reduce breast cancer risk. In addition, changes in lifestyle, such as increasing exercise, reducing alcohol consumption and eating plenty of fruits and vegetables can also help in maintaining a healthy body weight.

Study #2: Breast cancer survival rates after having cancer as an adolescent or young adult 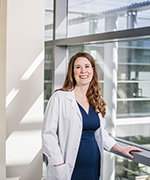 A troubling new discovery has Candice Sauder, a surgical oncologist at the UC Davis Comprehensive Cancer Center, rethinking the best approach to treating breast cancer in premenopausal women who had cancer as a child or young person and were treated with radiation.

A recent study conducted by Sauder and published in the September 2020 issue of Cancer Epidemiology, Biomarkers & Prevention shows that survival rates among premenopausal women with breast cancer were significantly worse if they had been treated with radiation for a prior cancer when they were young.

In fact, the women with breast cancer who had a prior cancer and were treated with radiation had roughly twice the risk of breast cancer-specific death compared to similar-aged breast cancer patients who had no previous cancer diagnosis.

Sauder and her colleagues turned to the California Cancer Registry to analyze data from women ages 12 to 50 diagnosed with primary or second primary breast cancer between January 1, 1988, and December 31, 2014.

Surprisingly, women who typically have a better prognosis with breast cancer — including those with hormone receptor-positive tumors, tumors without lymph node involvement, stage 1 disease and women of Asian or Pacific Island ethnicity — had a lower survival rate after a second primary breast cancer.

As a result of the findings, Sauder says we need to look for tailored treatment strategies for women with a second primary breast cancer.

“In second primary breast cancers it is really important to consider all options for treatment,” said Sauder. “At UC Davis Comprehensive Cancer Center, we feel a one-size-fits-all methodology to treating breast cancer is likely not the best approach.”

The study was sponsored by UC Davis Health and the UC Davis Comprehensive Cancer Center.