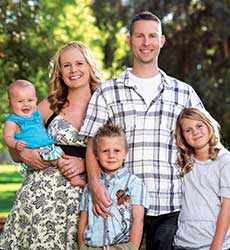 Mike Hinshaw was 27 years old when he learned that the father he hadn't seen since childhood was dying of Huntington’s disease. The inherited disorder that kills brain cells leads to severely erratic muscle movements and psychiatric symptoms. It usually strikes affected patients in their 30s or 40s and causes death 10 to 20 years later. Testing confirmed that Hinshaw had inherited the abnormal gene.

“Our doctor basically told us to go home and wait to die, that there was nothing anyone could do,” recalled Katie Jackson, Hinshaw’s wife.

“Fortunately, the Huntington’s Disease Society of America referred us to the HDSA Center of Excellence at UC Davis.” There, Mike and Katie found a different world from the one in which Hinshaw received his diagnosis. At UC Davis, they found a team of caring professionals –  physicians, nurses, counselors, and basic scientists who brimmed with infectious optimism as they worked toward finding a cure for Huntington’s.

In July 2012, their reason for optimism grew.  Mike and Katie were there when the California Institute for Regenerative Medicine (CIRM) announced grants to UC Davis researchers of $53 million in competitive awards to advance stem cell therapies and bring them to Phase I clinical trials –  including nearly $20 million earmarked for a ground-breaking new study of a potential therapy for Huntington’s disease.