Department of Physiology and Membrane Biology 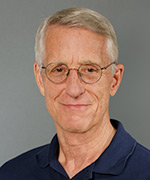 My research program has for many years investigated phototransduction, the molecular and biophysical mechanisms by which rod and cone photoreceptors in the retina transduce light into electrical signals. In the past decade it has focused on phototransduction in mouse cone photoreceptors. Ours was the first laboratory to develop a method for recording the light-driven currents of single mouse cones, and with this method and with cone-specific field potentials (electroretinography) which we also pioneered, we established a number of distinctive features of mouse cones. These include the functional co-expression of both mouse cone opsins (S- and M-) in most cones, the requirement for the G-protein receptor kinase Grk1 (formerly “rhodopsin kinase”) in cone opsin deactivation, and the functional co-expression of two arrestins (Arr1, Arr4), establishing that at least one of the arresting be present for normal deactivation of both S- and M-opsin.

Recently, we created an S-opsin knockout mouse line, and two S-opsin knockin (F81Y, E108Q) mice. The S-opsin knockout mouse has revealed a competitive inhibition between S- and M-opsin mRNA during translation in cones that co-express both opsins, and has provided an invaluable control for many experiments in which we assess biochemical and histological properties of S-opsin.

The F81Y knockin mouse has a surprising phenotype: though the point mutation shifted the λmax from 360 nm to 420 nm, it also led to 2- to 3-fold reduced expression, which we have shown is due to ER-associated degradation, which can be completely reversed by increasing 11-cis retinal exogenously. This has led to novel insight into the regulation of cone opsin expression, which we are pursuing vigorously, using AAV-delivery of fluorescent-protein tagged S-opsin DNA, and a variety of optogenetic reporters.

In the past eight years my laboratory has moved increasingly toward the use of two-photon (2P) imaging of live retina, after the construction of a 2P microscope suitable for working in live retina. It is impossible to investigate normal retinal function with 1P imaging, because the rods and cones are too sensitive to visible light. The infra-red spectral content of the Ti:Sapphire excitation beam in the 2P microscope is thus absolutely essential. We are also working on mouse models of degenerative disease involving cone opsins.

The department of Physiology and Membrane Biology is in the Top 20 and ranked 18 nationally for 2019 National Institute of Health (NIH) funding. Congratulations!!