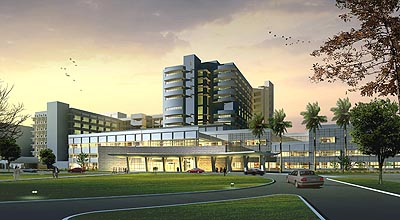 He has become a major benefactor, as well as a magnet for the contributions of numerous other philanthropists. Among them is Larry Ellison, co-founder and chief executive officer of database technology giant Oracle Corp. Ellison had shattered his elbow in a high-speed bicycle crash in 1992, and his search for a surgeon with the expertise to repair his devastating injuries led him to Chapman.

So effective was the reconstruction that Ellison at age 52 defeated a triathlete 20 years his junior in a “bar dip” strength exhibition. And so impressed was Ellison that he contributed $5 million to help establish the Lawrence J. Ellison Musculo-skeletal Research Center within what would become the Lawrence J. Ellison Ambulatory Care Center. That facility, which opened on the UC Davis Sacramento campus in 1998, allowed consolidation of outpatient services that had been in disparate locations. Ellison has since made additional contributions to the health system.

Early in his medical career, Chapman was chief of orthopaedic surgery at the Supreme Headquarters Allied Powers Europe. He rose to the rank of U.S. Army major. At UC Davis, Chapman chaired the Department of Orthopaedic Surgery for two decades, and served as chief of the Orthopaedic Trauma Service. After his retirement, he served two years as the chair of the board of trustees for the UC Davis Foundation, a volunteer fundraising board for the university. He recently agreed to serve as chair of the UC Davis Health System comprehensive campaign committee.

When UC Davis Health System announced plans to launch a $20 million fundraising campaign to help underwrite construction of the Surgery and Emergency Services Pavilion, Chapman and his wife, Elizabeth (Betty) Casady Chapman, stepped forward and pledged $1 million of their own money. 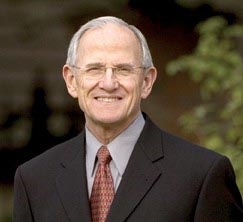 Renowned UC Davis orthopaedic surgeon Michael W. Chapman and his wife, Betty, are spearheading the fundraising for projects like the Surgery and Emergency Services Pavilion.

Their generosity prompted friends Denny and Jeanene Dickenson to do the same. Michael Boskin, an acquaintance of the Chapmans who is on the board of the Koret Foundation, also donated $500,000 through the foundation. To date, the Chapmans have given or secured more than $9 million in donations to UC Davis, including $3.5 million that they personally pledged, gave or directed.

The health services pavilion will house the Michael W. Chapman Trauma Center, which will reinforce the medical center’s capabilities as the region’s only designated Level 1 adult and pediatric trauma treatment facility. Construction of the emergency services pavilion is scheduled to be completed in 2010.

The groundbreaking approach that Chapman devised for treatment of patients with multiple injuries made UC Davis Medical Center internationally renowned for trauma care and established Chapman as one of the founders of modern trauma surgery. Chapman also helped found the Orthopaedic Trauma Association. He is the author of more than 160 publications, including the four-volume Chapman’s Orthopaedic Surgery, a standard reference work.