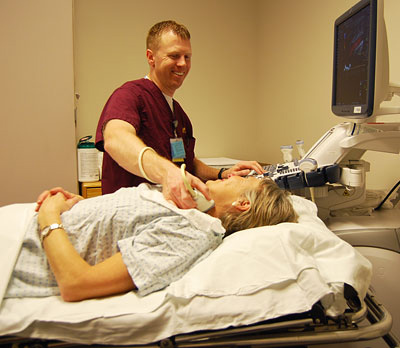 Ed Ronningen remembers many of the patients referred to him for vascular exams, especially a teenager who had been experiencing mini-strokes. He confirmed the results of an angiogram showing that her left common carotid artery was completely blocked, which is an untreatable condition. But he also noticed something of even greater importance — blood continued to flow through the left internal carotid artery (ICA), even though the angiogram suggested it may be completely blocked as well.

Ronningen knew that abnormal flow in this vessel — the main supplier of blood to the front left side of the brain — could contribute to the patient’s neurologic symptoms. He also knew it is possible to correct the condition with surgery.

“I showed the surgeon the evidence I found indicating that the ICA was still intact, and he performed a bypass to improve blood flow to the ICA,” Ronningen said. “The patient recovered well, and she had no recurrence of the symptoms that had plagued her for years.”

A significant contributor to patient care

As that patient’s return to health demonstrates, vascular technologists like Ronningen use ultrasound to evaluate blood flow in vessels throughout the body to help diagnose and plan treatments for vascular disease and disorders. When UC Davis patients exhibit symptoms of stroke, blood clots or other vascular diseases, their journey back to health usually begins in the vascular laboratory.

Ronningen supervises 10 vascular technologists and a patient scheduler at UC Davis who work closely with physicians in caring for patients with all types of circulatory disorders. His team performs more than 12,000 vascular evaluations each year at the health system’s main hospital in Sacramento and outlying clinics, as well as at the VA Northern California Health Care System and David Grant Medical Center at Travis Air Force Base.

“Our team is great at explaining what our technology does, why their doctor referred them to us and what we are looking for. Letting them know that about 99 percent of what we do is completely non-invasive helps ease any tension.”
— Ed Ronningen

Ronningen describes his role as a member of the UC Davis health-care team as “energizing.”

“A vascular ultrasound exam often reveals important pieces of the medical puzzle,” he said. “I might be asked to evaluate one particular part of the vascular system, but then notice something out of place that indicates a problem elsewhere in the body. I take very seriously the fact that putting those pieces together can contribute dramatically to the course of care for a patient.”

Vascular technologists have expertise in human physiology, imaging techniques, and aspects of physics and fluid dynamics. At UC Davis, vascular technologists also must be credentialed by the American Registry for Diagnostic Medical Sonography. Ronningen, who earned a bachelor’s degree in vascular technology from the Oregon Institute of Technology, was drawn to the field because of his interest in science and technology (especially the diagnostic capability of ultrasound) and because he enjoys interacting with people.

“The tests we perform can be time-consuming and require a lot of communication with the patient,” said Ronningen. “Many of the patients return for follow-up visits, creating the opportunity to develop personal relationships with them.”

An important part of that relationship is making sure patients know what to expect and helping them become comfortable with the technology.

“Just thinking about ‘tests’ and ‘imaging’ can be scary,” Ronningen said. “Our team is great at explaining what our technology does, why their doctor referred them to us and what we are looking for. Letting them know that about 99 percent of what we do is completely non-invasive helps ease any tension.”

An expert team and educational environment

Because UC Davis is a teaching hospital, its vascular lab is fully integrated into training programs for nurses, researchers, surgical residents and fellows. The educational environment sets UC Davis apart from other hospitals and requires that Ronningen and his team share their expertise with colleagues well beyond the lab. It is also one of the primary reasons why Ronningen joined UC Davis, which he believes may have been his destiny.

“Our staff is top notch and the medical staff shows great appreciation and eagerness to understand the work done in the vascular lab,” he said. “I really enjoy the teaching-hospital setting.”

His wife, a cardiac ultrasound specialist, was pregnant with the couple's son in 2010 when he learned from an acquaintance about the opening for the UC Davis Vascular Lab supervisor. At the time, Ronningen was supervising a vascular lab at a hospital in San Jose. He knew the Sacramento region offered a lifestyle similar to the one he enjoyed growing up in Oregon and that UC Davis presented an excellent opportunity to showcase his diverse 15 years of experience in his field.

“Both personally and professionally, this has been a very enjoyable change,” said Ronningen. “The vascular lab at UC Davis is very well known and highly respected, making this an excellent career opportunity. I’m very lucky to be part of this amazing environment.”