August is Spinal Muscular Atrophy (SMA) Awareness Month, and my daughter Malena is a rare disease patient who was diagnosed with SMA when she was 15 months old. Malena, almost 16 years old, refuses to be defined as a “girl with a rare condition” but instead as a vibrant high school student (Go Wolverines!), who is interested in both the dramatic arts and science. A young woman who has ambitions to attend Stanford University or an equivalent of her choice.

Malena has been a patient of Dr. Joyce since she was 10 years old. Dr. Joyce has been an instrumental partner and confidant in her SMA care.

Four years ago, the breakthrough drug Spinraza became available for patients with SMA. It was also very difficult to get this treatment locally as Malena had spinal fusion and the drug was fairly new. Malena was dramatically declining and losing arm function at this time and we were able to get treatment at Community Regional Hospital in Fresno under the careful guidance of Dr. Hutchinson. We traveled three hours each way over a period of years to be able to get access to this life-changing treatment.

Now fast forward to 2021: We trialed another breakthrough medicine with high hopes, but it caused serious side effects for Malena, so we were forced to halt it. We had the difficult prospect of having to resume Spinraza in the hopes of keeping SMA from progressing.

Thankfully, Dr. Joyce was able to gather a team of many players to collaborate to make sure Malena was able to get Spinraza as soon as possible to halt her SMA progression. We didn’t want a gap or pause in her treatment.

She was scheduled for an intrathecal procedure with a cross functional team. The team had to strategize scheduling with anesthesia, interventional radiology, children’s surgery center, and they managed to make all of this come together.

I’ve never seen a team so on top of everything. It wasn’t just the procedures that were followed to a tee, but everything was so well coordinated. It is difficult to get this level of coordination. It takes a lot of time and review. I was so impressed because I’ve gone to many institutions and I have never seen coordination like this, under the pressures of a pandemic.

Everyone did a fantastic job. Not one person dropped the ball. The Children’s Surgery Center was just amazing!! That’s why our family wants to have the teams recognized.

–  Testimonial submitted by Nina Daya, and reviewed and blessed by Malena

Gianna had to have brain surgery. So did her dad. 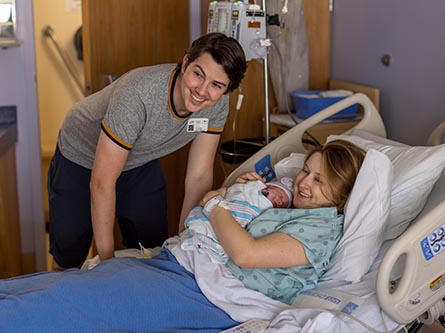