Discover how local athlete Evan returned to his active life after world-class doctors put his broken back together. 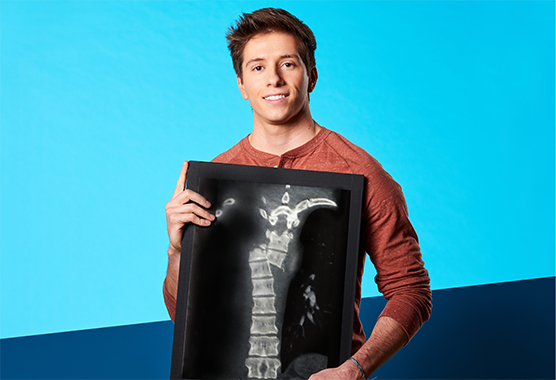 The team that put his broken back together again

A wreck that took him to rock bottom

A year ago, Evan Beauchamp was on top of the world. Newly graduated from UCLA, he had started a promising career, had a full social life and was doing a whole lot of what he loved most: wake surfing and weightlifting.

In an instant, Evan’s life hit rock bottom — literally. Late one night in October 2020, he found himself lying in a field after an ATV accident, unable to move his legs. His ribs were broken, one lung had collapsed, and hypothermia was setting in.

Though concerned about his legs, his most immediate concern was remaining conscious and being rescued. Every breath was painful.

Hours later, EMTs found Evan and transported him to the nearest hospital. Scans quickly revealed two things: nine shattered vertebrae, a dislocated spine, and the fact that the local health system simply couldn’t give Evan the world-class level of care he needed.

A surgeon saves a shattered back

“My back was just in pieces,” explains Evan. “It was a miracle my spinal cord hadn’t snapped and that no bone fragment had cut it.”

A second miracle was that Dr. Klineberg was able to repair his back so successfully, says Evan. “I was lucky to have one of the best spine surgeons on the entire West Coast.”

Despite his ordeal up to that point, Evan says the lowest point was still yet to come.

The surgery had provided the hope that rehab would allow Evan to regain some use of his legs. But after recovery and even after rehabilitation had begun, Evan still couldn’t move his body below his dislocation because of spinal cord contusion and inflammation from the physical trauma he’d sustained. For days he was bedridden. Already his once heavily muscled legs had withered. When his therapists helped him into a sitting position, he would get tunnel vision, temporarily lose his hearing and nearly pass out. He couldn’t go to the bathroom unassisted.

“That was my lowest point,” remembers Evan. “All I could think of was being a burden on my parents and everyone I know for the rest of my life.”

He turned that into motivation.

I can’t say enough about my experience with UC Davis Health. I’m just so lucky. They were so unbelievable. So phenomenal.—Evan

He moved into UC Davis Health’s inpatient rehab center and was soon astounding his therapists with his optimism and work ethic. He was a model patient, always asking for one more exercise, a few more reps. After a day of therapy, he’d lie in bed for hours trying to move his left leg — which was responding much slower than his right — just a millimeter. Then two millimeters. Then three.

By degrees, over a three-week period, he was finally able to move both his legs. Use a walker. Go to the bathroom alone. Then climb stairs with the walker. “The rehab center is where the magic happened,” says Evan. “My therapists were essential to where I am today.”

In early December 2020 just before he left the rehab center, Evan demonstrated to Dr. Klineberg that he could wiggle all his toes. Dr. Klineberg told him, “You cannot believe how proud I am of how far you’ve come.” Evan says that the look on his physician’s face was a mixture of pride, joy and “something really hard to describe.” Evan teared up.

It wasn’t until four months later that Evan fully understood that look on his doctor’s face. By that time, he was walking without a walker, had returned to work and was even weightlifting again — as Evan puts it, “engaged in life again.”

That’s when Evan looked for the first time at the medical imagery of his back and realized the true gravity of the odds he had been up against.

“A lot of people with those same images never walk again,” says Evan. “I’m glad I never looked. I can’t say enough about my experience with UC Davis Health. I’m just so lucky. They were so unbelievable. So phenomenal.”