An extraordinary procedure led Gianna to become one of the youngest patients to ever receive cochlear implants. 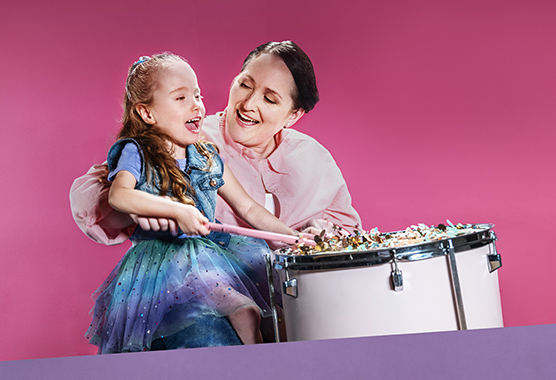 When Gianna Escobar was born on April 10, 2016, her parents had no advance notice that she would not be able to hear or see. They had no history of blind or hearing-impaired relatives and weren’t sure what to expect.

“Immediately, we felt a wave of emotions but were also encouraged by the amount of people who were willing to do anything for her, to love her,” Gianna’s mom Jamie explains.

Gianna was diagnosed with microphthalmia, an eye abnormality that arises before birth. In this condition, one or both eyeballs are abnormally small. In some affected, the eyeball may appear to be completely missing; however, even in these cases some remaining eye tissue is generally present.

For Gianna’s family, UC Davis Health was the clear choice to seek the advanced pediatric help they knew they would need.

With the expertise of the region’s only nationally ranked, comprehensive children’s hospital, Gianna was provided all of the specialists needed to help secure answers. To date, ten UC Davis Health specialists work with the Escobar family.

To support normal eye socket development, Gianna first received prosthetic eyes custom-made to fit her facial features and protect the inner eye, all of which remained fully intact and capable of vision if eye transplants become possible in the future.

Next, a team led by otolaryngologist Dr. Rodney Diaz worked with the family to determine options to provide Gianna with the best chance of interacting with the world around her. At three months old, Gianna received her first hearing aids for a trial that lasted a couple months. It was clear it wasn’t working, and other methods would need to be explored.

Together, doctors and family decided cochlear implant surgery would give Gianna the greatest odds of regaining sound and at 10 months old, she became one of the youngest patients to receive the surgery.

Cochlear implants are surgically placed devices that bypass the damaged part of the cochlea, the snail-shaped part of the inner ear that translates vibrations into recognizable sounds, to stimulate the auditory nerve directly. They can help even when a hearing aid can’t.

For Gianna, the surgery was a success. Within the first six months, her parents could see her paying attention to sounds, reaching for things that made noise, and even starting to form her own vocal sounds. UC Davis Health diagnostics and cochlear implants senior audiologist Dave Sheaffer began working with Gianna on auditory rehabilitation and speech and language therapy to help identify sounds and associate their meanings. After nearly a year, it was clear she was making significant progress.

“Around two years old, she just skyrocketed in the most positive way. She started saying mama and dada. Now, she’ll have comprehensive conversations and communicate her feelings. When she wants something or when she’s done with something, she can tell us,” her mom Jamie explains.

They have all been phenomenal. Gianna can be a lot to handle but all the UC Davis Health physicians we’ve had are able to adapt to her. Even our pediatrician’s nurse is amazing. They go above and beyond any medical providers we’ve had before.—Jamie, Gianna’s mom

Since receiving her cochlear implants, Gianna has started going to school, learning sign language and braille, and has found a particular passion in music.

“She loves to create songs. She likes to listen to music on the iPad and always has a song book in her hand. She can push a button on the music books and play a ton of different sounds,” Jamie says.

Gianna has also found continued joy in the interaction she has with her doctors. She asks for her UC Davis Health pediatrician, Dr. Eric Crossen, by name.

"They have all been phenomenal. Gianna can be a lot to handle but all the UC Davis Health physicians we’ve had are able to adapt to her. Even our pediatrician’s nurse is amazing. If we haven’t talked to them recently, she’ll call us just to ask how we’re doing. They even brought her a teddy bear when she was in the hospital. They go above and beyond any medical providers we’ve had before.”

“Our milestones are the things that other parents take for granted. Things like standing, chewing, sitting up independently, talking, and hearing our voices. We didn’t know if she’d ever be able to do those things but when she does – it’s amazing.”