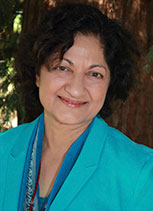 Under her guidance as chair of the Department of Medical Microbiology and Immunology, Dr. Dandekar has made strengthening the Department her utmost priority and focused her efforts on faculty recruitment and building the infrastructure for the Department. She also made it a priority to strengthen the infectious disease program at UC Davis through research and education. The Department currently is the primary research base for 21 faculty members, their respective staff and students.

Dr. Dandekar's research demonstrates for the first time that gastrointestinal mucosal tissue is an early target organ of HIV and an early site for viral replication and severe CD4+ T cell depletion (Guadalupe, et al. 2003). She has successfully integrated basic and clinical studies to determine the pathogenic mechanisms of mucosal HIV infection. Dr. Dandekar's research was also one of the first to demonstrate that GALT is an early target organ for the pathogenic effects of SIV infection. Dr. Dandekar's research described for the first time the restoration kinetics of gut mucosal system during therapy and repair of the damage to gut mucosal structure and function caused by the viral infection.

Dr. Dandekar's other research focus is in understanding enteropathogenic mechanisms of HIV and SIV pathogenesis. She has been responsible for developing an SIV enteropathogenic model for the studies of HIV-associated enteropathy.

Standing at the forefront of the California Stem Cell Initiative, Dr. Dandekar is developing a collaboration between experts in the fields of human embryonic stem cells, umbilical cord blood stem cells and HIV therapy to develop the ability to rebuild and restore a robust immune system in HIV infected patients that have been offered little hope of further treatment due to the ongoing battle in the development of drug-resistance HIV strains.

Collaborations with the Scripps Research Institute, Beckman Research Institute of the City of Hope, Case Western Reserve Institute and private industries ThermoGenesis Corp. and Lentigen, Inc. have led to exciting developments in this research field.

Furthermore, recognizing the importance of the international AIDS research programs, Dr. Dandekar has established an international collaborative research consortium in India for AIDS research. This includes the All India Institute of Medical Sciences at New Delhi, a premier biomedical research institution and a medical school, three grass-root non-governmental organizations (NGO) from Southern India and UC Davis. Two of the NGOs are located in coastal region of Andhra Pradesh that has one of the highest incidences of HIV infection, unique endemic infections and a large rural population. Dr. Dandekar has brought together researchers from the Department of Medical Microbiology and Immunology, Division of Infectious Diseases and the Department of Public Health Sciences and researchers from Stanford University for the development of this program.

Recently, she has been instrumental in developing a multi-institutional international program on HIV research in India and has participated in training of Indian researchers through her participation in the Northern California Center for AIDS Research as the Director of the Developmental Core activities. Current efforts are aimed at developing the infrastructure and cost-effective assays relevant to Indian setting for the care and management of HIV infected patients in India. She has experience working with NGOs with extensive community outreach and the Indian government research institution.

Dr. Dandekar is a collaborator of Dr. Richard Pollard in the California Research Center for the Biology of HIV in Minorities. Their research focuses on the study of the HIV infection in minority populations and their response to therapy and mucosal immunity. The Center will also provide pilot funding and mentoring to junior investigators through the Pilot Projects Core that is directed by Dr. Dandekar.

In addition, she is also involved in the collaborative research investigation on mucosal immunity in HIV infected patient cohorts through the Center. Dr. Dandekar is very active in evaluating the research of her peers.

This has led to a recent appointment to the NIH Director's Council of Public Representatives and is also recognized in her frequent contributions as a reviewer of many journals in her field of research such as the Journal of Virology, Blood, Journal of Experimental Medicine, American Journal of Pathology, AIDS Research and Human Retroviruses, AIDS etc.

Dr. Dandekar maintains memberships in several societies and associations; is a well-known lecturer both nationally and internationally and has been an invited speaker at a number of recognized academic institutions.

Within the UC Davis community, Dr. Dandekar is well-known as an inspiring and well-organized teacher. Dr. Dandekar has designed and implemented several new series of courses, workshops and seminars related to the following research areas: Microbiology and Immunology Research Seminar Series, DNA Microarrays and Animal Models of Infectious Diseases.

MMI 291 Seminars will continue via Zoom.