With respect to health and fitness, body composition is used to describe the percentages of fat, bone and muscle in human bodies. The body fat percentage is of most interest because it can be very helpful in assessing health. Because muscular tissue is denser that fat tissue, assessing ones body fat is necessary to determine the overall composition of the body, particularly when making health recommendations. Two people at the same height and same body weight may have different health issues because they have a different body composition. 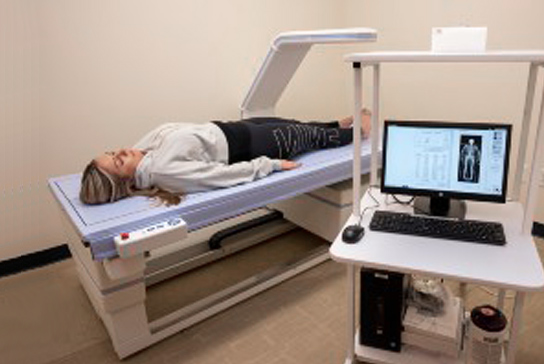 Dual X-ray Absorptiometry (DXA) is a quick and pain free scan that can tell you a lot about your body.

Although body fat endures a negative reputation, fats and lipids play critical roles in the overall functioning of the body, such as in digestion and energy metabolism. Fat is the body's energy provider and energy reserve, which helps the body maintain a constant temperature. Fats and lipids are also involved in the production and regulation of some hormones such as, steroid hormones. These are essential in regulating sexuality, reproduction, and development of the human sex organs, as well as in regulating the water balance in the body.

From a performance stand point, excess body fat lowers your work to weight ratio, This means that a heavier person would consume more energy per minute of work resulting in a lower energy economy during activity. In addition, excess body fat can lead to additional loads placed on joint during weight bearing activities such as running, causing joint distress. Healthy or athletic body fat percentages typically allow for more optimal performances, due to the improved economy and reduced injuries.

The immune system is often impaired when body fat stores are too low. A reduced ability to fight infections means more interruptions in training and more chance of being sick on race day. For female athletes, there are some very immediate consequences of a low body fat level, including a fall in circulating oestrogen levels. This in turn can lead to a loss of bone mass, causing problems for women in later life through an increased risk of bone fracture.

Assessing body fat can be done using the following methodologies:  Hydrostatic weighing, skinfold assessment and bio-electrical impedance. Of these methods, one that is both accurate and practical is skinfold measurement. The measurements are taken with calipers, which gauge the skinfold thickness in millimeters of areas where fat typically accumulates (i.e., abdomen, hip, arm, back, and thigh). Once the measurements are recorded, the numbers are inserted into an equation that calculates a body fat percentage and alternatively body lean mass. When measurements are performed with good technique, the skinfold test can accurately predict body fat with a plus or minus 3% margin of error. Skinfold is a preferred method of body fat measurement for non-clinical settings because it is easy to administer with proven accuracy and is not obtrusive with regards to the patient. It also provides much more data than just the final composition measurement - it also yields the thickness of many sites, which can be used as bases of comparison with future results. For example, an abdominal skinfold improvement from 35mm to 24mm would show a significant improvement in that site even if the overall body fat percentage may have only reduced minimally.

BMI is often mistaken as measurable guide to body fat. However, BMI is simply a weight to height ratio. It is a tool for indicating weight status in adults and general health in large populations. BMI correlates mildly with body fat but when used in conjunction with a body fat measurement gives a very accurate presentation of your current weight status.

With that being said, an elevated BMI (above 30) significantly increases your risk of developing long-term and disabling conditions such as hypertension, diabetes mellitus, gallstones, stroke, osteoarthritis, and some forms of cancer. For adults over 20 years old, BMI typically falls into one of the above categories (see table above).