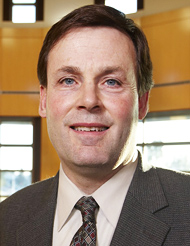 The LARRC is a Resource Center for Minority Aging Research (RCMAR), funded by the NIA to increase the number of researchers addressing health disparities among the elderly. It is the only RCMAR focused on aging and Hispanic health. LARRC Director Ladson Hinton opened the conference by highlighting the integration and collaboration across the LARRC and Alzheimer's Center. Carl V. Hill, director of special populations at the NIA, provided the opening keynote on “NIA Updates on Cognitive Disparities Research,” discussing a broad overview of the field and a framework for disparities research.

The afternoon session featured work by junior scientists supported by NIA-funded training programs at UC Davis and UC San Francisco, and addressed the role of a variety of factors — including education, genetics, neighborhoods, life-course experiences, positive affect and idea density — on cognitive decline in diverse populations.

In the afternoon, Mungas moderated a panel discussion of future directions to advance the field that included: