Department of Biochemistry and Molecular Medicine 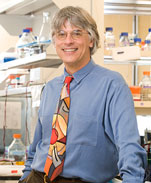 The principal objective of the Hagerman laboratory is a greater understanding of the molecular underpinnings of the fragile X family of disorders, including the neurodevelopmental disorder, fragile X syndrome, and the neurodegenerative disorder, fragile X-associated tremor/ataxia syndrome (FXTAS). Although both fragile X syndrome and FXTAS are caused by CGG-repeat expansions in the fragile X mental retardation 1 (FMR1) gene; the two disorders affect different groups of individuals, and operate through entirely different molecular genetic mechanisms. Understanding the alterations of FMR1 gene expression that lead to these two separate disorders, and the development of targeted therapies for both fragile X syndrome and FXTAS, are the fundamental objectives of the lab.

Since our discovery of this neurodegenerative disorder in 2001, we have been involved with its characterization at the molecular, cellular, neuropathologic, and clinical levels. Based on our parallel discovery of elevated FMR1 mRNA in carriers of premutation alleles (55-200 CGG repeats), we and others have proposed that the pathogenesis of FXTAS involves “RNA toxicity” of the mRNA, by virtue of sequestration of one or more RNA binding proteins by the expanded CGG-repeat RNA.

Fragile X syndrome is the most common inherited form of cognitive impairment, also displaying a broad spectrum of emotional and behavioral involvement. The promoter region of full mutation forms of the FMR1 gene (> 200 CGG repeats) is generally hypermethylated and transcriptionally silent, resulting in little or no FMR1 mRNA protein (FMRP). FMRP is an mRNA transport protein and a negative regulator of translation for messages that are utilized in synaptic plasticity. Thus, fragile X syndrome is intrinsically a protein-deficiency syndrome. Fragile X syndrome is also an important genetic basis of autism, with over 50% of boys with fragile X syndrome demonstrating features of autism or autism spectrum disorders. Moreover, approximately 2 to 6% of children with autism have fragile X syndrome. The phenotype of fragile X syndrome includes hyperactivity, attention problems, anxiety, sensory integration problems leading to tactile defensiveness, unusual hand mannerisms such as hand flapping, shyness, and poor eye contact.

Our main effort is directed toward the development of targeted approaches for induction of FMRP expression in individuals with premutation or full mutation alleles of the FMR1 gene, who are producing low levels of the FMR1 protein (FMRP). Although much of this work is still in progress, strategies generally include disruption of CGG-repeat secondary structure, and of developing methods to block the effects of microRNA regulation of the FMR1 gene at the level of translation.