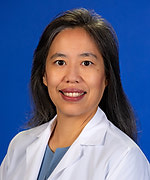 I am committed to collaborating with you and your family to promote the health and wellbeing of your child and help them reach their full potential.

In my group practice, we work as a team to partner with patients, families, pediatric medical and surgical specialty providers, mental health providers, schools, and other community agencies to care for a child's special needs.

Our practice is part of a large hospital and clinic network that provides comprehensive health care for your child throughout their lifetime, from birth through adolescence and transition to young adulthood.

Dr. Yang is a general pediatrician who provides comprehensive primary care for infants and children from the newborn period through adolescence.

Dr. Yang's academic interests focus on training healthcare professionals, especially for regions with healthcare workforce shortages. Her educational mission targets learners all along the health professions pathway, from inspiring K-12 students as they explore health careers, to supporting students and residents in their identity formation as health professionals, to coaching faculty in advanced skill development. She also seeks to establish innovative and sustainable clinical-community partnerships that improve networks of care, community linkages, and systems that ultimately result in improved health outcomes for children and families.

UCSF Fresno Department of Pediatrics Distinguished Teacher of the Year, 2008