Discover how a primary care doctor helped Derrick lose nearly 100 pounds and get on track towards a healthy future. 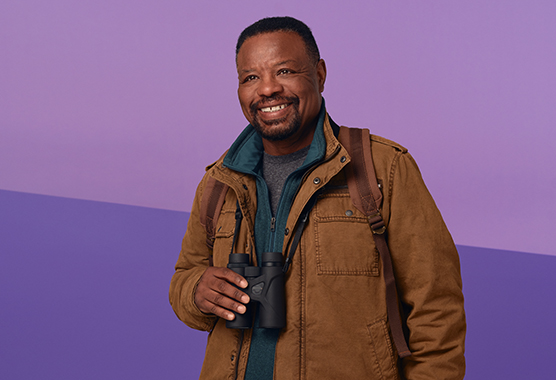 The primary care that put him back in motion

It was in an appointment with his UC Davis Health primary care physician when Derrick, 62, first came to the realization that his life needed to change.

“Dr. Nelsen, my doctor, sat me down and explained my own mortality. She explained obesity to me in a way I had never heard – and the effects it was having on me,” he says.

At the time Derrick weighed more than 300 pounds and didn’t know how to lose the weight.

“My health was getting bad. I had tried all the fad diets – losing weight only to gain it all back again. I liked to drink and eat. If it wasn’t fried, I didn’t like it.”

But all of that changed when his brother suddenly passed away from a heart attack.

<p“He died during Thanksgiving week – two days before his birthday. And it was my breaking point. I knew I needed a lifestyle change before it was too late,” Derrick explains.

Emotionally, I didn’t think I could get through it. But they hung in there with me. No one ever pushed me. Instead, they had conversations with me and helped me to understand what I needed to do and how I could do it.—Derrick

After multiple primary care appointments, lab work, and testing, Dr. Kay Michelle Nelsen met with Derrick to discuss the possibility of bariatric surgery, a surgical weight loss procedure that helps those who cannot lose excess weight through diet and exercise alone. She believed Derrick was an excellent candidate.

Because of the trust he had built with Dr. Nelsen, Derrick decided to move forward with her suggestion.

Through his UC Davis Health primary care, Derrick was referred straight to the bariatric surgical team, who explained the entire process of pre- and post-surgery. To be successful, the surgery would require significant lifestyle changes and intensive work – including losing some weight ahead of time.

“Emotionally, I didn’t think I could get through it. But they hung in there with me. No one ever pushed me. Instead, they had conversations with me and helped me to understand what I needed to do and how I could do it,” he says.

Six months prior to the surgery, Derrick was responsible for beginning his journey by meeting with behavioral specialists who taught him techniques to better handle the surgery and maintain a healthy routine afterward.

“This was all during COVID, so no one could be with me. I couldn’t have my family at appointments for support. It was the hardest thing I’ve ever done in my whole life,” he explains.

It was during this time Derrick connected with a bariatric nurse, Barbara Jachniewicz, that he still refers to as his guardian angel.

“I owe her a lot. She really was like my family – taking care of everything I ever needed. She got me through it.”

While the worry of surgery was heavy for Derrick, he soon realized that it was working better than he ever expected.

“After surgery, everything they said was going to happen actually happened,” he says.

Derrick went from a man with bad asthma and serious complications from diabetes to a man nearly 100 pounds lighter, who could breathe easy and go down to just a small dose of insulin each night.

“I even see better. And I’m on my third wardrobe at this point,” he laughs.

Since his surgery, performed by Dr. Mohamed R. Ali, UC Davis Health’s Chief Bariatric Surgeon, Derrick has been able to reclaim the kind of energy he hadn’t felt since he was a young man in the Marines. He’s back to spending more time with his two children and five grandchildren – going swimming, hanging out at the park, and walking everywhere he can.

And to this day, he credits his primary care physician and the incredible, above-and-beyond care he received from nurse Barbara for the push he needed to get his life back on track.

“Nurse Barbara told me the day before surgery that it was going to work out, and no matter what she would stick with me,” he says. “And it was in a moment when I was truly afraid. It changed everything for me.”