Discover how pediatric specialists and heart surgery before 3-years-old gave him a bright future. 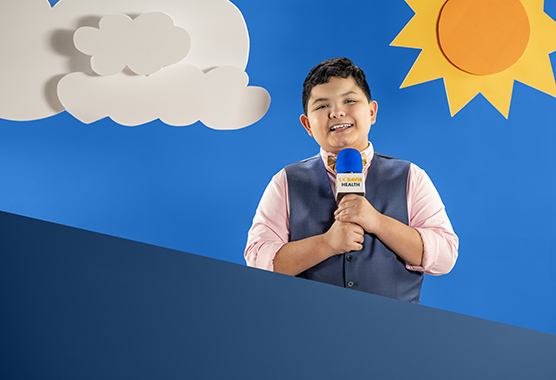 The specialists who gave a boy a heart for life

When Sacramento mom Beatriz found out she was having her first baby, she couldn’t have been more thrilled.

“It was one of the greatest moments of my life,” Beatriz says.

Like any mom, she made sure to get all of the prenatal tests, anatomy scans, and check-ups that all signaled her baby, Damian, would be born healthy.

It wasn’t until a day after his birth that she learned the news.

Damian had been diagnosed with Tetralogy of Fallot (TOF) – a rare combination of four related heart defects that occur together. He was to be transported immediately to UC Davis Children’s Hospital. While receiving care, they also determined he had bilateral hearing loss.

At three months old, Damian was having his first open-heart surgery. Another surgery followed six months later. And another two years after that.

At almost two years old, he was also getting his first official hearing aids.

“I just never expected any of this. Damian was our first child, and you can’t be prepared for something like this,” Beatriz says.

“When he was transferred to UC Davis Children’s Hospital, I had to put all of my faith into them and to this day, I’m so glad I did.”

Building a new kind of strength

Amid his continued treatment and health struggles, Damian suffered a tragic loss. His dad passed away. It had a big effect on this little boy and his family.

“When his father died, Damian was only 3 ½ but I could tell how much it impacted him,” Beatriz explains. “Over time, Damian began to look at things differently; to appreciate things a lot more. He took obstacles and used them to push him further.”

This boy is here for a bigger purpose. He’s meant to have a big impact on the world and UC Davis helped to keep that alive for him.—Beatriz, Damian’s mom

Sheer will, combined with quality care from the UC Davis Children’s Hospital team, not only helped Damian survive, but helped his family weather the storms. Fast forward a decade plus and despite his hearing challenges, Damian speaks Spanish, English, and American Sign Language and has dreams of becoming a meteorologist.

“The otolaryngology department has been on top of his needs from day one. They guided me within the school system to ensure Damian had what he needed to excel,” said Beatriz. “Our experiences with cardiology, neurology, gastroenterology and physical therapy have been equally as positive. The staff are so empathetic. They’ve always had Damian’s best interest at heart.”

And while Damian still has at least one more surgery ahead of him, his daily life has started to more closely resemble that of any little boy with a love of cars, games, and sports.

“This boy is here for a bigger purpose. He’s meant to have a big impact on the world and UC Davis helped to keep that alive for him. He’s got a lot of living to do but right now is his time to just be a kid and have fun.”