Discover how a clinical trial and an oncologist at the region’s only NCI-designated comprehensive cancer center saved Thomas’s life. 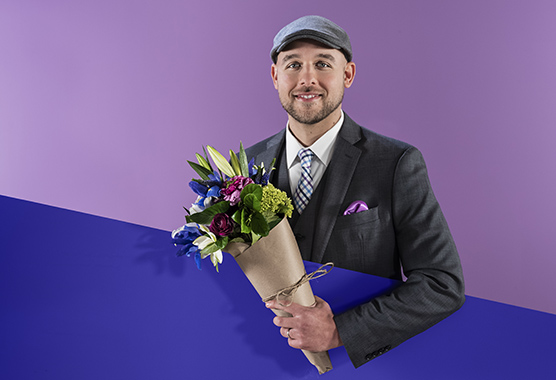 When Thomas came to UC Davis Health, he was an athletic, 28-year-old newlywed – who had just been diagnosed with a rare stage IV cancer that was likely to take his young life.

It was October 2016 and Thomas had just run a half marathon. He was feeling great – except for a slight cough.

“I had recently moved from Long Island to California, and the environment is different out here. I went to a doctor nearby who ran some tests and they told me it was probably just allergies,” Thomas explains.

By the time of the marathon, Thomas had endured an entire summer of coughing but hadn’t developed any other symptoms. He was even feeling strong enough to book his annual snowboarding trip for Thanksgiving break, just a few weeks later.

But the night before he was planning to leave, things took a turn.

“The cough just wouldn’t go away, and it was getting a lot worse. I was starting to have trouble getting air, and that’s when it was like, ‘Ok. We should not be going on a trip. We should be going to the emergency room.’ ”

“All they had to do was take a chest X-ray and found a mass the size of a grapefruit on my mediastinum. They saw from the first test that it had spread to my lungs and spine, too,” he says.

Doctors immediately believed that it could’ve spread to even more organs, and knew it was urgent to get Thomas under the care of Dr. Joseph Tuscano, one of the leading oncologists at UC Davis Health’s Comprehensive Cancer Center.

Quickly, Thomas was diagnosed with primary mediastinal B-cell lymphoma, a cancer that is often treatable – but had progressed very quickly throughout his entire body.

“Typically, these patients can do quite well with a high percentage being curable. However, because he did not respond to his initial therapy, he was considered to have what is described as primary refractory lymphoma for which the prognosis was not looking good. With subsequent progression like Thomas had, usually only 10-20% of patients survive long-term,” Dr. Tuscano says.

It was tough. I can’t sit here and say it was easy or anything like that. I really had a great support system, the best wife who did everything for me, and great physicians which really saved my life.—Thomas

The treatment of a lifetime

To start, Thomas was treated with traditional chemotherapy to shrink the tumors. It didn’t help – making the diagnosis for the young newlywed even more dire.

“This was a young couple out here on their own away from family handling this really bad disease. Thomas’s wife is a nurse, so she understood the severity and prognosis and was very fearful,” Dr. Tuscano explains.

“It’s one of those stories you see in the movies where the wife is looking at you with tears in her eyes, begging you to help. They have their whole lives in front of them. These situations tend to bring out the best and the worst in relationships – and you could see the intensity of their love without saying anything. It was incredibly poignant.”

By working together with Dr. Tuscano, Thomas and his family decided to enroll him in an immunotherapy clinical trial that was designed by Dr. Tuscano at UC Davis Health and funded by the National Cancer Institute.

The response Thomas had to the clinical trial was the first good news they had received in a long time.

“The immunotherapy in the clinical trial put him in complete remission, however it was unknown how long this remission would last, especially given the experimental nature of the treatment, and thus the treatment was not considered curative. He needed an additional treatment for a chance at long-term survival,” Dr. Tuscano says.

The additional treatment was an allogeneic stem cell transplant, a procedure in which stem cells are collected from a matched donor and transplanted into the patient to suppress the disease and restore the patient’s immune system. In turn, attacking the cancer and, in some cases, curing it.

And in this case, the matching and willing donor was Thomas’s younger sister.

At just 21 years old, she traveled 3,000 miles to participate in the procedure. All signs pointed to a successful transplant, until Thomas began to experience what doctors call a loss of donor chimerism. His body was losing the immune system he had just been given through the new stem cells.

To support her brother, who had already experienced more than his fair share of heartache, Thomas’s sister came back just a few short weeks later to give more cells.

In between recovering and building up his newly transplanted immune system, Thomas faced new and unexpected hurdles. One of them was graft vs. host disease, which can occur after any type of transplant when the body begins to reject the foreign materials it has consumed.

But Thomas overcame every challenge and all the odds.

“The outcome was fantastic,” Dr. Tuscano says. “And pretty emotional too.”

“As a physician, it’s really difficult to see a young person going through so much. They have family members pushing to do everything possible because they love this person so much and they don’t want to lose them. I’m so happy that in this case he went from such low odds to an amazing outcome.”

And as for Thomas and his wife, they regained an entire future.

“It was tough. I can’t sit here and say it was easy or anything like that. I really had a great support system, the best wife who did everything for me, and great physicians which really saved my life,” he says.

“And now it’s my responsibility to share my story, because sometimes it takes sharing just one success story to help save someone else.”