Schistosoma Antibody: 1.5 OD.
(Note: A value greater than or equal to 0.2OD is presumptive evidence of a current or past infection with a Schistosoma. ARUP Laboratories).

The colonic biopsies show distorted architecture with acute and chronic inflammation. There is a prominent granulomatous tissue reaction to foreign material (Figure1). On higher power, the granulomatous reaction is surrounding multiple helminthic ova with calcifications and developing mericidia (Figure 1, 2). There is prominent eosinophilic infiltration (Figure 2, 3, 4). The location, size and configuration of the ova are suggestive of schistosoma; however it is difficult to make a definitive diagnosis on paraffin-embedded tissue. The definitive diagnosis can be made on wet mount stool examination.

Schistosoma mansoni is a human parasite within the in the Trematoda class of the phylum Platylhelminth. Schistosomiasis is a disease that affects people primarily through Africa, parts of Asia and eastern South America. The three primary species that infect humans are S. mansoni, S. haematobium, and S. japonicum. 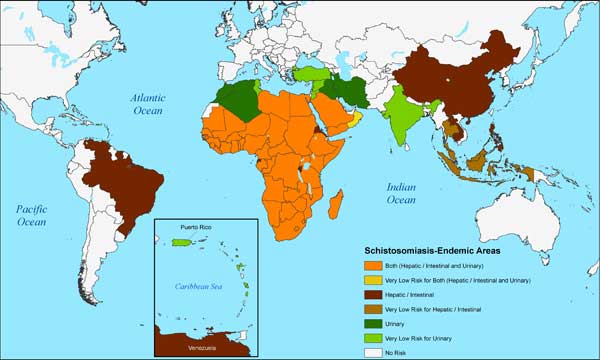 The life cycle of schistosomes involves an intermediate host, the snail. The larvae (mericidia) hatch when human feces or urine is deposited in the freshwater. The snail then becomes infected with the mericidia, whereby it will enter the sporocyst stage and will produce many gametocytes that mature into cercaria. The cercariae are released into the freshwater to penetrate the human skin. Within the human, the cercaria mature into schistosomes (flukes), undergo sexual reproduction and migrate to species specific anatomic locations. S. mansoni primarily infect the portal veins, superior and inferior mesenteric venous plexuses. The larvae then migrate into the small intestine and colon where they are shed. S. haematobium primarily infects the venus plexuses of the urinary bladder and are shed in urine. S. japonicum is more variable in its residence, as it can be in the portal tracts, mesenteric, lung or central nervous system vessels.

The clinical presentation involves three stages. The first stage is the acute (within 12 hours) skin dermatitis which presents as an urticarial or pruritic popular rash at the site of cercaria invasion. The second stage is a systemic hypersensitivity, known as Katayama fever and is caused by the maturation and migration of the schistosomes to their preferred anatomic location. This stage is variable in onset and severity, but typically presents at 5-7 weeks, and involves fever, myalgias, chills, cough and peripheral eosinophilia. The third stage is the chronic phase which, in most cases, will persist until the patient is treated. The flukes continue to reproduce and the human may shed anywhere between 300 and 3,000 eggs/day.

In addition deposition, the flukes also release toxins that initiate a TH-2 mediated host response causing distinct peri-portal fibrosis. This eventually causes portal hypertension and splenomegaly, yet sparing the hepatocyte. There is limited evidence to support the idea of S. mansoni directly causing hepatocellular carcinoma (HCC). However, it may potentiate the progression to HCC in patients infected with hepatitis B or C in the liver (9). In addition, the invasion of the eggs and surrounding reaction in the colon can cause ulceration, stricture, iron-deficiency anemia and rarely obstruction. Polyps may develop at the site of granulomatous inflammation. A similar granulomatous reaction occurs to the eggs of S. haematobium causing inflammation of the walls of the urinary bladder walls and ureters, thus leading to ulceration, fibrosis and obstruction. There is a high risk for hydronephrosis, kidney failure, and ultimately may cause squamous cell carcinoma of the bladder.

The definitive diagnosis is by stool examination for ova and parasites. The Kato-Katz technique for concentration of stool sample is the method of choice. Detect of eggs by stool examination require a daily burden of 3000-6000 eggs. The eggs of the different species have a different microscopic morphology. The eggs of both S. mansoni and S. haematobium are 115-170 micrometers and 40-70 micrometers in width. However, S. mansoni has a prominent lateral spine, while S. haematobium has a terminal spine. The eggs of S. japonicum are smaller (80-100micrometers) and round, lacking a spine. These eggs may also be seen in paraffin embedded tissue biopsies, however due to the tissue processing and subsequent distortion, it is not as reliable. There is a serologic antibody test that can be performed; however, it cannot distinguish past infection from current infection.