The presence of a red cell alloantibody with Hr/hrs red cell antigen specificity was identified.

1)  What does the initial finding suggest?

When working up patients with a positive antibody screen, the autocontrol is often utilized to help suggest different underlying etiologies for a pan-reactive antibody identification panel. Broadly speaking, a positive autocontrol with similar reactivity in all panel cells (pan-agglutination) suggests a cold-reacting autoantibody or paraproteinemia. A negative autocontrol with strong reactivity in all panel cells (poly-agglutination) suggests a possible red cell alloantibody with specificity against a high frequency antigen and requires further work up.

2)  What further testing would be warranted in this case?

The complex testing in cases of poly-agglutination is usually performed at a sophisticated reference laboratory. In the case of this patient, her work up was initially completed at the American Red Cross Blood Services Immunohematology Lab and included elution/adsorption studies. Testing with Rh depleted cells revealed no reactivity, and further testing confirmed the presence of a red cell alloantibody with Hr/hrs specificity.

Serologically, this patient phenotyped as type O RhD positive, C-, E-, and c+; thus she was initially assumed to be R0r by the Wiener Rh system notation. However, at the reference laboratory she phenotyped as e-antigen negative. We therefore sent a sample of the patient’s blood to a reference laboratory for molecular analysis of the RHD and RHCE genes. This test is commonly performed using both multiplex PCR as well as the HEA BeadChip™, and can predict the Rh phenotype of the patient as well as identify altered genetic loci.

Interestingly, the two methods of genetic analysis showed a minor discrepancy. On the HEA BeadChip™ assay, the patient was resulted to be positive for the c and e antigens but negative for the C and E antigens. However, on multiplex PCR analysis, alterations of both RHD and RHCE genes were identified. Her probable RHD genotype was given as RHD*DAR1/RHD*DAR1 and her probable RHCE genotype given as RHCE*ceEK/RHCE*ceARCF. She therefore has a predicted phenotype of partial D+, C-, E-, partial c+, and partial e+. Both of her rare variant RHCE alleles were found to be hrs negative.

3)  What test(s) could be performed to assess the clinical significance of this newly identified red cell alloantibody?

The question of the clinical significance of these extraordinarily rare red cell alloantibodies with high-frequency antigen specificity is of paramount importance, particularly in a pregnant patient. As transfusion medicine specialists, we carry the obligation to provide expert consultation, in collaboration with blood bank technical specialists, to our clinical colleagues as they manage these difficult cases through the peri-partum and post-partum periods, and potentially manage hemolytic disease of the fetus/newborn (HDFN).

The initial study performed when a red cell alloantibody is identified in a pregnant patient is an antibody titer. The antibody titer has been shown to have a statistically significant correlative relationship with fetal anemia1, although cases of HDFN at markedly low maternal antibody titers have been reported. The in vitro antigen specificity of the antibody thus lends a clue to its potential for clinical significance2. Our patient’s anti-Hr/hrs titer performed a month prior to delivery was quite high at 1:512 (it had been monitored throughout her pregnancy and continued rising steadily). Tests for fetal wellbeing, however, indicated no fetal distress.

Additional cellular laboratory assays exist which may help predict whether maternal alloantibodies will cause HDFN. The efficiency, time, expense, and false positive rates of these cellular assays when compared to a simple antibody titer have precluded them from becoming standards in clinical practice, though they are favored at some academic sites.

In this case, we sent a sample of the patient’s blood to the American Red Cross Immunohematology Laboratory for a monocyte monolayer assay (MMA) to help assess the clinical significance of her alloantibody. In a small study, the MMA has been shown to have a sensitivity of 100%, specificity of 90.9%, positive predictive value of 87.5%, and negative predictive value of 100%3 when predicting in utero hemolysis. It has also been shown to be useful in predicting clinically significant transfusion reactions from incompatible red cells; however, a negative MMA does not predict long-term survival of the red cells transfused to the patient4.

The patient’s MMA revealed 34.5% phagocytosis, which was consistent with a clinically significant antibody (the cut off is 5%4). The following educational image provided to us by Pat Arndt MS, MT (ASCP) SBB at the American Red Cross, Southern California Blood Services Region, Pomona CA reportedly appeared similar to the patient’s case. 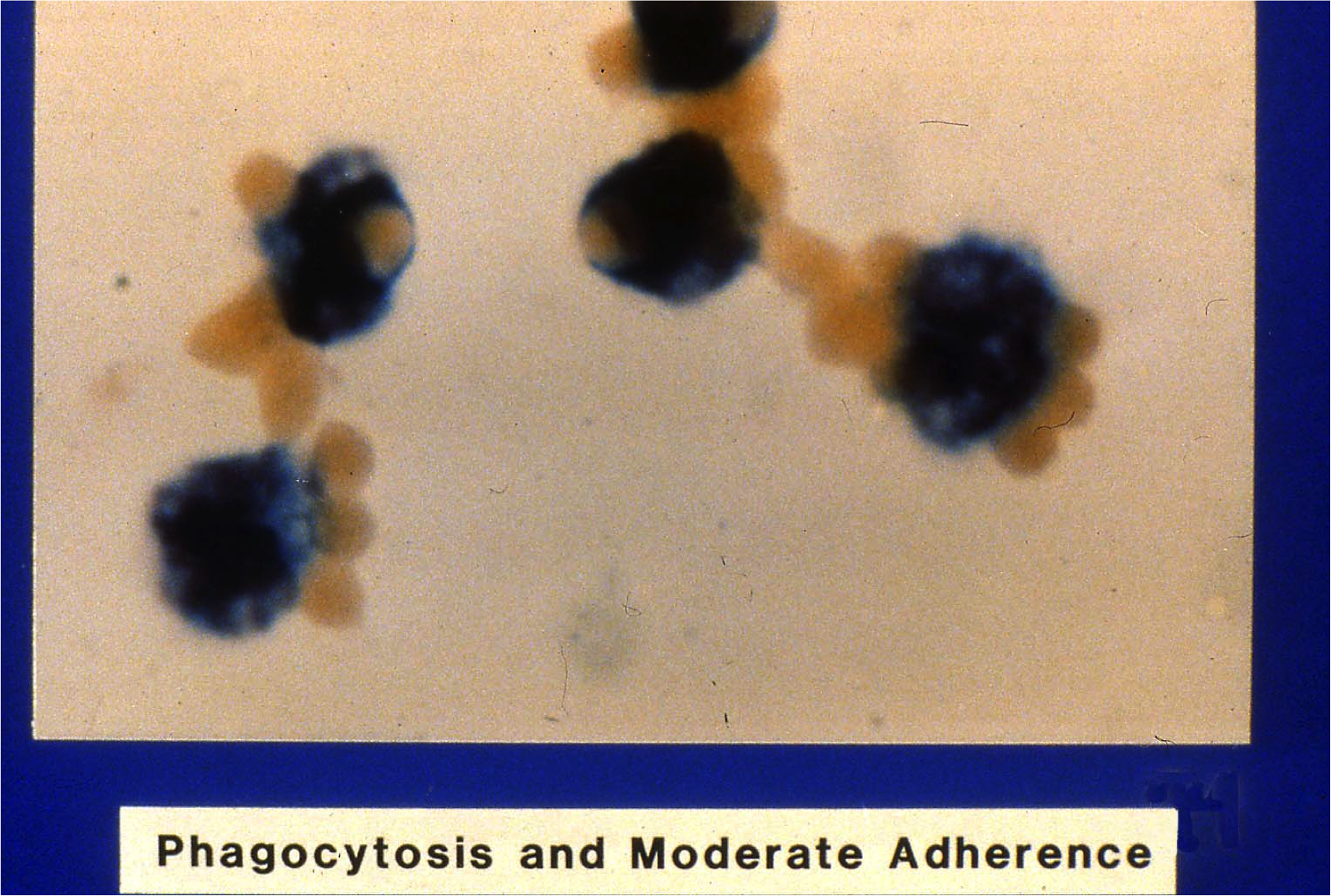 4) How would you manage this patient in the peri-partum period?

This patient requires transfusion with Rh null or Rh depleted red cells (likely from a donor who is D - -); due to her prior alloimmunizations, any transfused red cells must also be E-, C-, K-, and S-. A sample of her blood was crossmatched with samples from her mother and sisters to attempt identifying a directed donor. However, all her family members were incompatible.

The Rare Donor Registry can be accessed by blood centers across the US. In preparation for her delivery, our regional blood center, BloodSource, identified two frozen red cell units in an international search. They were both from a single donor that was D - -, K-, Fya-, and S-. A crossmatch performed with the patient’s sample was compatible with segments from the donor units. The patient underwent an elective Caesarean section and had no transfusion requirements.

A full term, serologically type A RhD positive baby boy was delivered with APGAR scores of 8/8. A cord blood specimen revealed a positive direct Coombs test, and the sample was sent to the BloodSource reference laboratory for further work up. An eluate showed the presence of an antibody with anti-little-e antigen-like activity as well as reactivity against a high frequency antigen in the Rh system. The maternal anti-C antibody was not identified in the elution. This confirmed that the maternal anti-Hr/hrs had crossed the placenta and coated the fetal red cells.

The baby was followed with transcutaneous bilirubin monitoring. He stratified below the hyperbilirubinemia treatment curve and in the low-intermediate risk zone for developing hyperbilirubinemia. His hematocrit on the first day of life was 37.4% (mildly low) and he had a reticulocytosis; however, his direct and total bilirubin levels were monitored and remained normal. His serological red cell phenotype was found to be K-, C+, E-, and S-. He was monitored in the newborn nursery for several days then discharged in a stable condition with close clinical follow up. He had no adverse events and did not require transfusion support.

Anti-hrs is an IgG antibody that reacts preferentially with haplotypes containing ‘ce’. Generally, it is not considered clinically significant (although the hrs antigen is expressed on cord blood cells). However, for unknown reasons some hrs negative patients may broaden their antibody specificity to make anti-Hr (anti-Rh18), which may cause hemolytic disease of the newborn5.

We assume in this case, because of the mildly low hematocrit and reticulocytosis, the baby had a mild case of HDN which self-resolved. The patient was counseled to undergo a tubal ligation and may be recruited as a red cell donor in the future.