PDTC is a rare thyroid carcinoma with a prevalence rate of 1.8% in the United States and typically occurs in patients 55-60 years of age.  The reported mean five-year survival rate is approximately 50-70%.  Poor prognostic factors include age greater than 45 years, tumors greater than 5 cm in size, extra-thyroidal extension, metastatic disease, and histopathologic factors such as tumor necrosis and oncocytic features.

While the etiology of PDTC is largely unknown, it is believed that some tumors arise from preexisting papillary or follicular carcinomas while others may arise de novo.  The frequency of genetic alterations in PDTC is intermediate between differentiated and undifferentiated carcinomas.  Early driver events in carcinogenesis are thought to include mutations in HRAS, KRAS, NRAS, BRAF, or ALK genes.  Later events associated with tumor dedifferentiation may involve the AKT1, TERT, CTNNB1, β-catenin, TP53, and RET genes.

Clinically, most PDTCs present as large, solitary thyroid masses greater than 3 cm in diameter at the time of diagnosis.  There is frequently an association with longstanding nodular hyperplasia, though PDTC may uncommonly present as a rapidly growing mass.  Furthermore, there may be extra-thyroidal extension and nodal, lung, and bone metastases at the time of diagnosis.  Cytologic studies of PDTC commonly show high cellularity with dyshesive small to intermediate sized cells.  Nuclear pleomorphism is unusual while necrosis and mitoses are frequent findings.

A definitive diagnosis of PDTC should be made on the basis of histology and relies on the identification of common patterns together with an infiltrative pattern of growth, necrosis, and vascular invasion.  The three recognized histologic patterns of PDTC are: insular, characterized by nests of tumor cells surrounded by thin fibrovascular septa; trabecular, characterized by cells in cords or ribbons; and solid, characterized by large sheets of tumor cells.  The tumor cells in PDTC are generally uniform, contain hyperchromatic or vesicular nuclei, and often show nuclear features resembling those of papillary carcinoma, such as convoluted nuclei.  In addition, there may be foci of follicular, papillary, and undifferentiated components present within the tumor.  While PDTCs typically show immunoreactivity for thyroglobulin, positivity may be restricted to isolated tumor cells or poorly developed follicles.  Positivity for TTF1, TP53 (focal), and increased Ki-67 index are additional common features.

In addition to the clinical features, this patient's thyroid tumor possessed histological features consistent with PDTC: the overall growth pattern, prominent necrosis, and cell morphology.  However, the lack of significant mitotic activity and obvious vascular invasion did not fit the usual description of PDTC.  In formulating a differential diagnosis, one can include medullary, follicular, papillary, and undifferentiated carcinomas.

While medullary carcinoma may also exhibit insular and solid growth patterns with necrosis, its immunohistochemical staining profile differs from that of PDTC.  Medullary carcinoma invariably shows positivity for neuroendocrine markers such as synaptophysin and CD56 while being negative for thyroglobulin.  Synaptophysin and CD56 were negative in this patient's tumor while thyroglobulin was positive in a minor subset of tumor cells.

Papillary carcinoma, particularly the solid variant, may resemble PDTC based on growth pattern and the potential for necrosis.  However, the conventional nuclear features of papillary carcinoma are lacking in this patient's tumor, including nuclear overlap, optically-clear chromatin, distinct nuclear grooves, and nuclear pseudo-inclusions.  Furthermore, diffuse thyroglobulin reactivity is also expected in papillary carcinomas.

Figure 6: Area of follicular differentiation and
colloid formation within the tumor, 100x 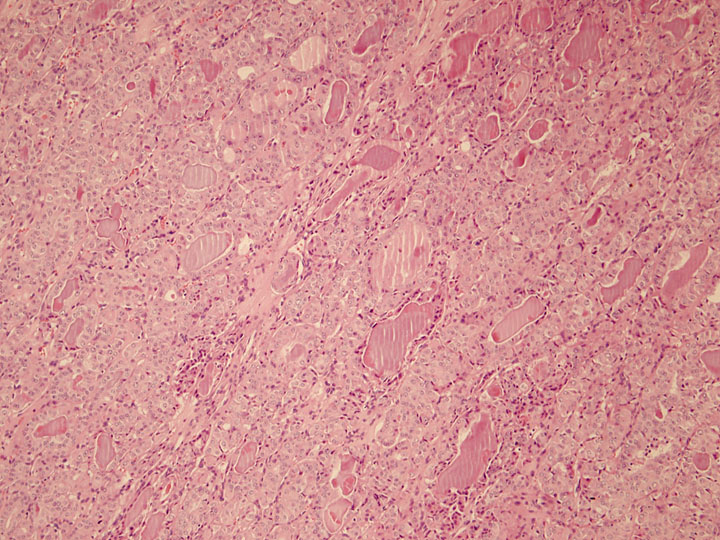