Mucormycosis is a potentially fatal infection caused by fungi of the order Mucorales. These organisms are ubiquitous in nature, grow rapidly, and release spores that can become airborne. All individuals have exposure to these fungi during day-to-day activities. The disease is usually thought of as a sinonasal infection (rhino-orbital-cerebral mucormycosis), with commonly cited risk factors being diabetes, corticosteroid use, organ/stem cell transplantation, defects of phagocytosis, and other forms of immunocompromise, though increasing numbers of cases without the typical risk factors have been reported over the last 20 years [1,2]. Sites of primary infection other than the nasal sinuses are possible, including the lungs, the gastrointestinal tract, the cutaneous and subcutaneous tissues, the kidneys, the central nervous system [1,2]. Additionally, disseminated infection can occur [1,2]. Regardless of primary site of infection, the disease course is characterized by necrosis of host tissues resulting from invasion of the vasculature by fungal organisms and subsequent infarction [2]. Progression of the disease is usually rapid.

Gastrointestinal mucormycosis is uncommon and is thought to occur by ingestion on fungal spores [2]. Patients present with abdominal pain with or without hematemesis [1,2]. Prognosis for these patients is extremely poor, with most cases diagnosed at autopsy to the rapid progression of the infection precluding timely diagnosis before death [1].

Histologically, the causative organisms are relatively distinct, making diagnosis possible without ancillary studies. The hyphae of the Mucorales are broad, irregularly branched (often with branching at 90-degree angles, see (Figure 5 and Figure 6), and have rare septations [1,3]. 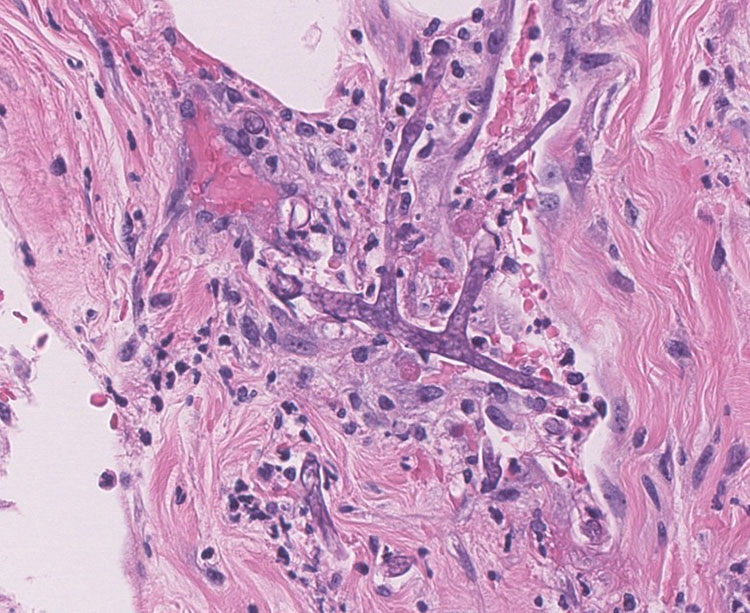 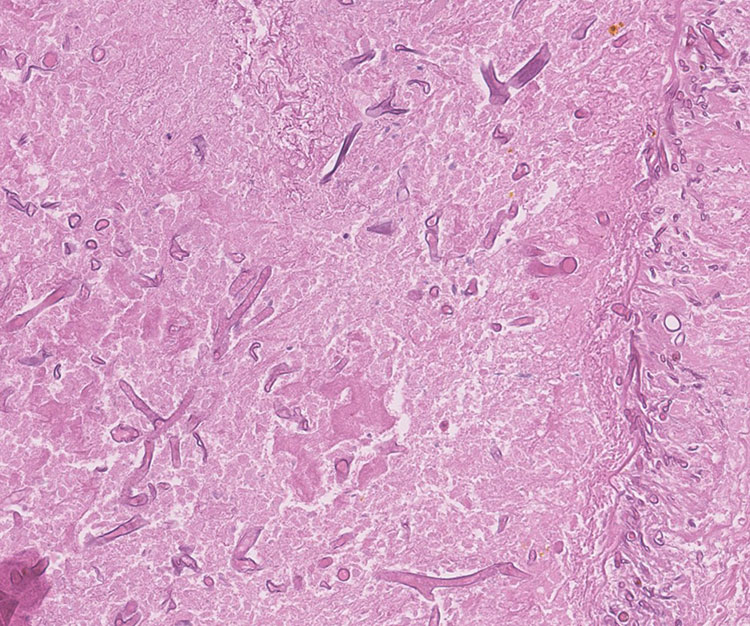 The surgical team was immediately notified of the fungal infection once the diagnosis was made. The patient was started on anti-fungal therapy and a second surgery was performed to remove any remaining infected or necrotic tissues. Despite these rapid and aggressive measures, the infection was ultimately too wide-spread and the patient unfortunately expired one day after diagnosis.