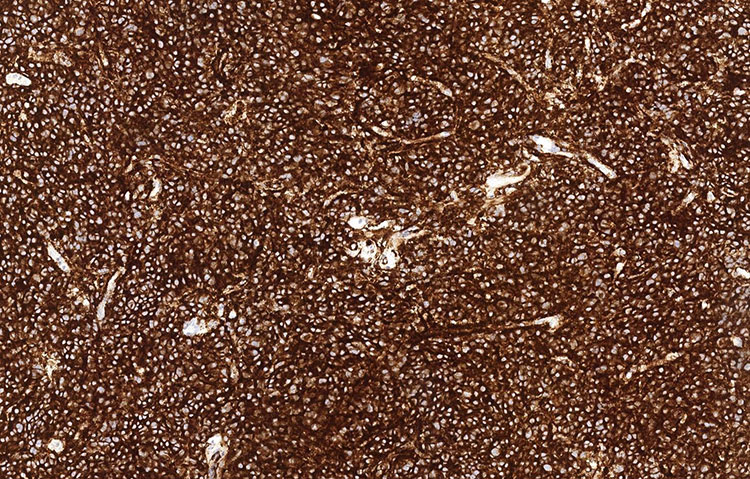 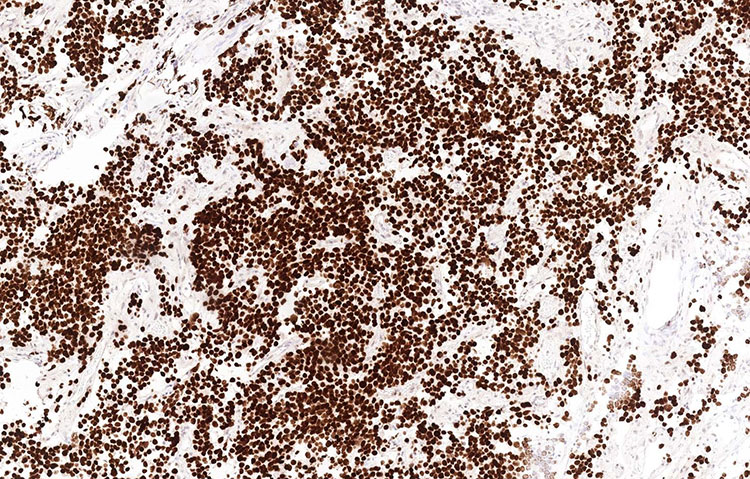 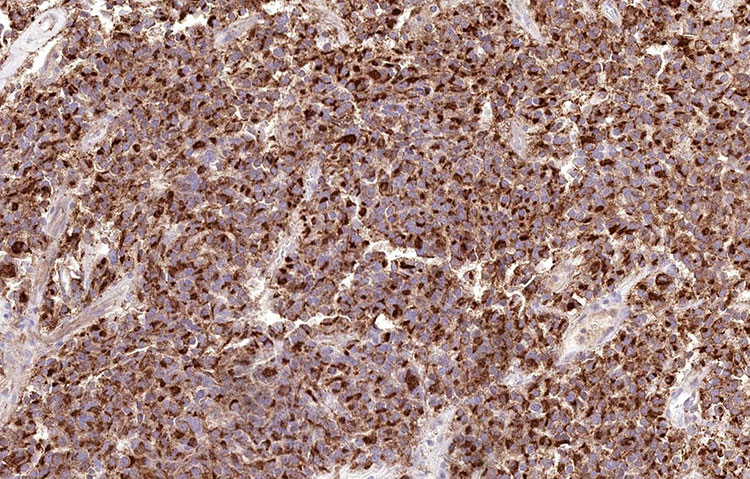 Pituitary adenomas (PAs) are common in the general population, with autopsy series showing a prevalence of approximately 10%. Most PAs are small, asymptomatic, and do not produce clinically detectable amounts of pituitary hormones. The prevalence of clinically apparent pituitary adenomas ranges from 1 in 865 to 1 in 2688 persons. Of these, approximately 2/3 secrete clinically detectable hormones, usually prolactin (32-66%),GH (8-16%), ACTH (2-6%) or rarely TSH. 14-54% are clinically nonfunctional, and these usually show expression of gonadotropin hormones.1

Prolactinomas tend to be large (macroadenomas, >= 10mm). Pituitary adenomas are usually composed of uniform, polygonal cells in sheets or cords. There is sparse intervening reticulin fiber network between cells, unlike the normal pituitary gland. The nuclei are round with neuroendocrine nuclear features such as indistinct nucleoli and fine chromatin.2 Both nuclear atypia and high mitotic rate are uncommon, though their presence may correlate with aggressive behavior.3

Most pituitary adenomas are confined to the sella turcica or the cavernous sinus. However, rarely they can extend into or occur ectopically in the clivus.4 The clivus is part of the skull base and refers to a portion of the occipital bone just anterior to the foramen magnum and just posterior to the sella turcica at the junction between the sphenoid and occipital bones. Due to its atypical location and morphologic overlap among several tumors that can occur in the cranium, the differential diagnosis included lymphoma, plasmacytoma, paraganglioma and olfactory neuroblastoma, metastatic neuroendocrine tumor, and chordoma.

The clivus is a classic location for chordoma (answer choice B), which is thought to originate from notochordal remnants. The cells have a distinctive vacuolated cytoplasm, arranged in sheets or cords within a myxoid stroma.5 The cells stain for cytokeratins, S100, EMA, and a specific marker is brachyury. Plasmacytomas (answer choice E) are also known to occur in the parasellar region, and morphologically can mimic pituitary adenoma.6 However, negative staining for CD138 and cytoplasmic immunoglobulin light chains (kappa and lambda) ruled this out. Lymphoma (answer choice C) was also considered, but the negative staining for CD45, the common leukocyte antigen, made this much less likely. Astrocytomas (answer choice A) would show a glial fibrillary background, are usually are composed of ovoid cells with more hyperchromatic chromatin, and would not stain for neuroendocrine markers.

There are a variety of other neuroendocrine tumors that can occur in the cranium, including olfactory neuroblastoma, paragangliomas, and metastatic neuroendocrine tumors which were considered based on morphology and location. These tumors also show expression of chromogranin and synaptophysin, though S100 may be helpful in olfactory neuroblastoma as it highlights the sustentacular cells around groups of neoplastic cells.

In this case, staining for PIT1 and specific pituitary hormones was helpful in establishing the diagnosis. PIT1 is a nuclear transcription factor expressed particularly in prolactin, GH, and TSH secreting pituitary adenomas.7 Finally, specific immunohistochemical stains for the various pituitary hormones was used to confirm characterization as a prolactinoma, and prolactin showed a cytoplasmic staining pattern highlighting the cells’ secretory granules.