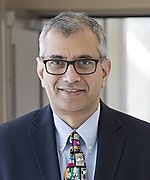 To see if Satyan Lakshminrusimha is accepting new patients, or for assistance finding a UC Davis doctor, please call 800-2-UCDAVIS (800-282-3284).

Dr. Lakshminrusimha's philosophy of care is to provide every neonate, infant and child with evidence based, nurturing family centered care, enabling them to thrive and develop to their fullest potential; to invest in research that improves our understanding of human biology and leads to new discoveries that result in better outcomes for patients; to mentor the next generation of health care providers and researchers to achieve these goals.

Dr. Satyan Lakshminrusimha is a Neonatologist offering care to term and preterm newborn infants. He has special interest in disorders of neonatal transition such as persistent pulmonary hypertension of the newborn (PPHN). His research focus is on neonatal resuscitation and role of oxygen in regulating pulmonary vascular resistance.

Dr. Lakshminrusimha's research focuses on neonatal resuscitation, oxygen and nitric oxide and their role in regulation of pulmonary vascular resistance and value and evidence based management.

American Board of Pediatrics, 2013

American Board of Pediatrics, Neonatal-Perinatal Medicine, 2015

American Board of Pediatrics Sub board of Neonatal Perinatal Medicine

Pediatric Academic societies (PAS), Annual lung club keynote speaker: The lung club is the annual gathering of physicians, scientists and trainees interested in the field of pulmonology, neonatology and critical care with one speaker every year for the past 30 years., 2017

Mentor of the Year Award, In recognition of sustained excellence as an educator and mentor of medical students, pediatricians-in-training, and pediatrics faculty, The Eastern Society for Pediatric Research meeting, 2016

Vali P, Mathew B, Lakshminrusimha S. In quest of epinephrine's optimal route and dose in neonatal cardiopulmonary resuscitation-are we there yet? J Pediatr. 2017 Oct;189:239.