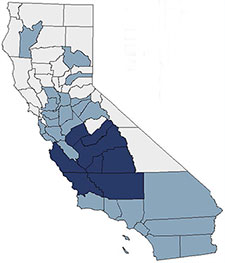 Found mostly in the western United States, valley fever is caused by the fungus Coccidioides immitis, which thrives as microscopic spores in arid soil.

When the ground is disturbed by wind, construction, farming or other movements, the spores become airborne. They can then be inhaled and cause infection within the lungs and in other parts of the body via the bloodstream.

Sixty percent of those exposed to the fungus do not develop symptoms, or have mild flu-like symptoms that resolve on their own. But a very small proportion of people develop disseminated disease that causes chronic pneumonia, joint pain, fever, fatigue or meningitis, a potentially fatal infection of the membranes and fluid covering the brain and spinal cord.

Because symptoms can resemble common illnesses such as flu and bacterial pneumonia, physicians may not think of the disease early in the course of a patient’s illness.

If you have symptoms of valley fever and you live in or have visited an area where the fungus that causes the infection is common in the environment, ask your doctor to test you for valley fever.

If you have valley fever, you may need treatment with prescription antifungal medication.

"Deadly Dust - Valley Fever in the West" is a new half-hour ViewFinder documentary produced by KVIE Public Television. The episode premiered March 26 and is available to view online.

Tweets by Medical Microbiology and Immunology