On autopsy, posterior urethral valves were identified on dissection of the prostatic urethra. Additional findings were consistent with Potter sequence including dysmorphic facies, genu varum abnormality of the bilateral lower extremities, small lungs for gestational age (weights consistent with 28-29 weeks), marked bilateral hydronephrosis, and an enlarged, dilated bladder with 11.5ml of urinary retention.

Posterior urethral valves (PUV) are obstructing membranous folds within the lumen of the posterior urethra. It is the most common etiology of urinary tract obstruction in the newborn male and occurs with an incidence of 1 in 5000 to 8000 live births. PUV is also the most common cause of chronic renal disease due to urinary tract obstruction in children. The pathogenesis is related to a disrupted development of the male urethra between weeks 9 and 14 gestational age. Proposed disruptions include persistence of the urogenital membrane with abnormal canalization of the urethra, overgrowth of the urethrovaginal folds, and abnormal integration of the Wolffian duct into the posterior urethra.

The vast majority of PUV cases are identified by prenatal ultrasonography. Patients who are diagnosed postnatally usually present either as a newborn or young infant with associated clinical manifestations. Depending on the severity of the obstruction and the gestational age at which the obstruction occurs, the infant may develop a sequence of related complications termed "Potter sequence". Because urination is necessary after 14 weeks gestational age to produce and maintain amniotic fluid levels, the infant with a urethral obstruction will develop oligohydramnios, pulmonary hypoplasia, hydronephrosis, a distended hypertrophic urinary bladder, and external dysmorphic features secondary to the oligohydramnios. The spectrum of disease is related to the timing and severity of the obstruction. Genetically, PUV is usually sporadic, although rare familial forms may occur. Transcription controlling genes (such as HOX) have been possibly implicated, but there is no overt genetic mutation yet identified as causal. Cytogenetic and microarray samples from the decedent revealed a normal male chromosome complement.

The decedent’s alveoli were immature histologically (image 1). Gas exchange was possible on high frequency oscillating ventilation. It is presumed that the immaturity of his lungs led to diffuse alveolar damage which in turn may have incited the DIC, causing the pulmonary hemorrhage.

The additional finding of fetal hydrops does not entirely fit with PUV syndrome alone. Fetal ascites may occur in PUV cases due to rupture of the urinary bladder and leakage of urine. Chemistry tests performed on the ascitic fluid of the decedent, however, showed an electrolyte and creatinine composition consistent with serum. Grossly the foramen ovale was patent and appeared to have appropriate septum primum and secundum formation. However, since echocardiography identified a restricted PFO, it is most likely that this cardiac anomaly contributed to the complications in this case. 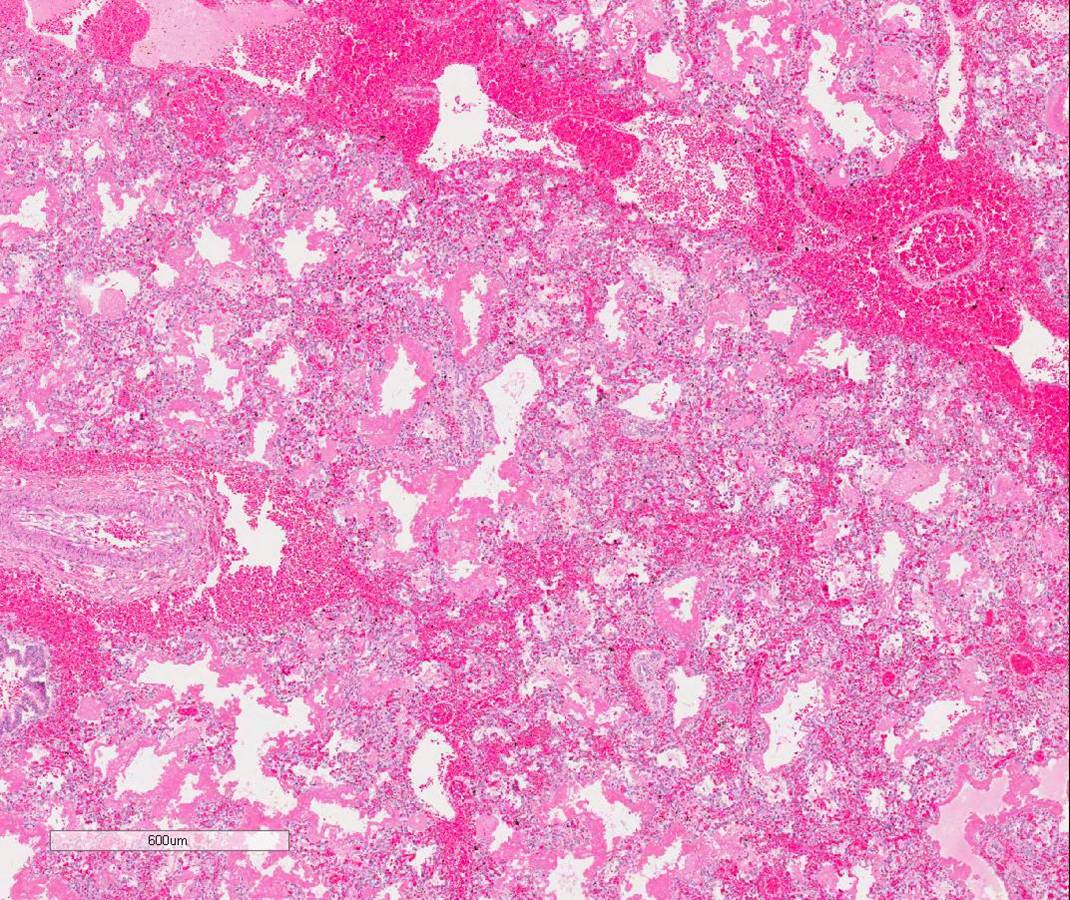