The organism isolated in this case, confirmed through MALDI-TOF and 16S rRNA sequencing, was toxin-negative Corynebacterium diphtheriae biovar gravis. While most commonly and historically associated with upper respiratory infections with necrotic, adherent oropharyngeal pseudomembranes, C. diphtheriae has been identified as an emerging cause of systemic diseases, including sepsis, endocarditis, osteomyelitis, and septic synovitis (so-called “non-toxigenic infections”)1.

C. diphtheriae is a pleomorphic, club-shaped, Gram positive bacillus that is catalase positive, non-motile, non-spore forming, and non-acid fast.1 On Gram stain, the organisms are typically described as having a “picket fence” or “Chinese character” morphology (image 3).  Recent advances in testing have shown a tremendous diversity in the genus, with molecular methods outpacing and outperforming benchtop testing for definitive classification.1 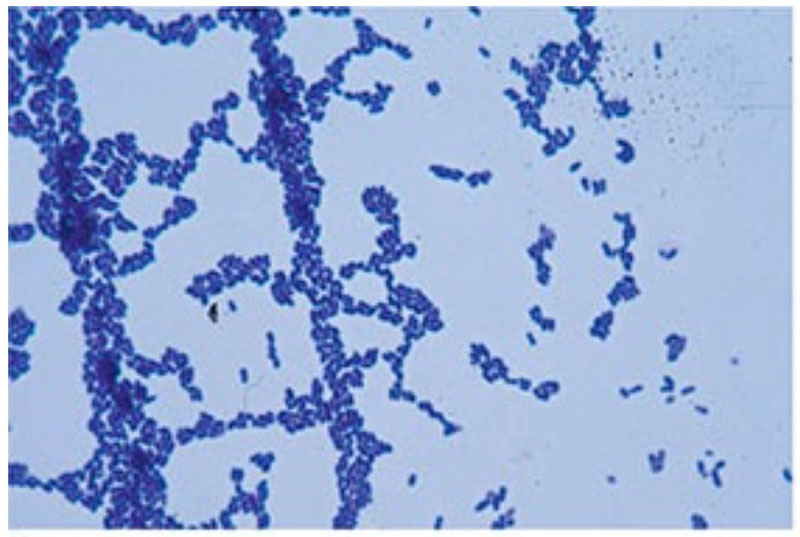 The classical diphtheria infection results from inoculation of a host via sneezing or coughing of an infected third party. Humans, while long thought to be the definitive host of C. diphtheriae, have been shown to share organisms with cats, cows, and horses, though these are typically non-toxigenic organisms.1,2 The incubation period is between 2 and 7 days, with symptoms including a sore throat, difficulty swallowing, fatigue, and sometimes fever. Classic signs include tan-gray, densely-adherent pseudomembranes in the posterior oropharynx (an amalgam of bacterial organisms, neutrophils, and fibrin); these typically bleed when removed.1

In addition to pseudomembranes, diphtheria is best known for neuropathies (including cranial nerve and oropharyngeal paralysis) and diffuse myocardiopathies (either present in 20-70% of patients).1 These symptoms are a result of the diphtheria toxin. Produced in vivo by the bacteria, the toxin is a 58 kDa polypeptide composed of two fragments: Fragment A and Fragment B.1 Fragment B encodes the receptor and translocation binding domains, and has a role in allowing passage of diphtheria toxin into host cells. Fragment A, the biologically active portion, acts as a catalyst, transferring adenosine diphosphate ribose from NAD to Elongation Factor 2 (EF-2), thereby inactivating EF-2 and shutting down cellular protein synthesis.1 It is the activity of Fragment A that leads to host cell death. The toxin is highly potent, with a LD determined to be between 100 and 150 ng/kg.3

Generation of the toxin is not native to the Corynebacterium proteome (i.e. in their normal state, C. diphtheriae are negative for the diphtheria toxin gene). A bacteriophage (β-corynephage) carries the tox gene, which can infect a C. diphtheriae cell and integrate its nucleic acids into the bacterial genome (a process called lysogeny).1 Interestingly, not all β-corynephages carry the tox gene (i.e. some are β-corynephagetox-).1 Therefore, not all C. diphtheriae cells that have been infected by the β-corynephage will produce the diphtheria toxin. (Additional reports from Europe have identified non-toxigenic tox gene-bearing strains, called NTTB, which have a mutation in the A subunit that prevents expression of the toxin even while the tox gene is ostensibly present.4)

Universal vaccination in the US has been in place since the 1940s, with the last large outbreak of diphtheria in the US occurring in the 1970s.1 The universal vaccination program has been so successful that, from 1980 to 2010, only 55 US cases of diphtheria have been reported to the CDC.1 Vaccination begins at 2 months of age, and proceeds through childhood and adulthood with repeated booster shots. The vaccination induces antigenic moieties of the diphtheria toxin (not the C. diphtheriae organism itself), thereby protecting individuals from the neurologic and cardiac sequelae of diphtheria toxin production during infection.1 Since, however, the vaccination does not induce antibodies against the bacillus itself, infection with toxigenic and non-toxigenic organisms is still possible.

Non-toxigenic infections of diphtheria can be mild to severe, ranging from cutaneous wounds and superficial skin infections to sepsis, endocarditis, septic arthritis, and osteomyelitis, with sequelae resulting in significant morbidity and mortality.1 First identified in 1893,5 C. diphtheriae endocarditis, as was found in this case, have been on the rise globally since the 1980s, for reasons that are poorly understood.1 Just less than 100 cases have been reported in the literature to date.5 Fatality rates for C. diphtheriae endocarditis have been reported as high as 41%.2 Risk factors for C. diphtheriae endocarditis include congenital heart / valvular defects (including prosthetic valves), mitral regurgitation, rheumatic fever, alcoholism, homelessness, and intra-venous drug abuse.1,5 Approximately 37% of cases have been reported in patients with no known risk factors.6 Mycotic aneurysms, septic emboli, and septic arthritis are common sequelae, and prompt identification and treatment is necessary to prevent long-term morbidity and mortality.

While the exact pathogenesis of non-toxigenic C. diphtheriae endocardial infections is not known, it is believed that variations in the adhesive pili on the bacterial surface play a role in enhancing the ability of the bacterium to penetrate the respiratory epithelial barrier and enter the bloodstream.4,7 Studies have shown a tremendous variety of bacterial pili, and the specific import of each variant remains to be elucidated.7 Importantly, the genetic diversity of pili is found on genomic islands, which are thought to easily move between strains of C. diphtheriae.4 The bacteria are either phagocytosed by epithelial cells (normally a non-phagocytic cell), or pass directly through the cytoplasm, later resulting in epithelial cell death. This allows the bacteria access to penetrate into deeper tissues.6 While this is the suspected route, most patients who develop C. diphtheriae endocarditis do not have a documented primary source of infection.8

Microbiology laboratory investigation typically includes standard aerobic growth media (SBA, Chocolate agar), which show a catalase positive gray-white, smooth, typically non-hemolytic (or very slightly hemolytic) colonies. Media containing cystine and potassium tellurite (like a modified Tinsdale agar) will show black colonies (due to tellurite reductase activity) surrounded by a brown halo (due to cystinase activity).1 The intracellular reduction of tellurite is what gives the colonies the gray-black appearance. Studies have indicated that not all isolates of C. diphtheriae can reduce tellurite, possibly leading to a false-negative result on selective agar and misidentification of the pathogen (so-called “tellurite resistance”).9 Other organisms, including Staph and Strep spp. may appear as black colonies on the modified Tinsdale agar, but typically do not have a brown halo.1 Typically, C. diphtheriae do not produce urease, which can help distinguish it from C. ulcerans and C. pseudotuberculosis, both of which do.1

Morphologically, there are four distinct colony types: Gravis, Mitis, Intermedius, and Belfanti. Both Gravis and Mitis have larger colonies (1-2 mm at 24 hours’ growth), with a convex shape and entire edges; they may show some weak beta hemolysis.1 Intermedius typically shows smaller colonies (less than 1mm at 24h) that are blacker and denser.1 Molecular methods have been shown to accurately identify various isolates of C. diphtheriae, and molecular classification has largely supplanted morphologic biotyping, in addition to underscoring its genetically arbitrary biotype categorization.4 Studies have shown a core genome of over 1,600 genes (approximately 60-70% of the genome4), in addition to variation in the tox gene, including copy number (resulting in a dosage effect, and more severe clinical presentations).7

Typical treatment for non-toxigenic C. diphtheriae infections includes penicillin, ampicillin, or erythromycin; treatment for toxigenic infections is similar and includes treatment for additional disease sequelae.1 C. diphtheriae is typically not resistant, however multidrug resistant isolates have been rarely identified, typically originating from endemic (i.e. non-vaccinated) populations.1 Prompt treatment is necessary to prevent long-term morbidity and mortality, even while identification is sometimes hindered by the lack of growth, or inability to obtain rare selective media at smaller hospital labs.10 Once definitively isolated, laboratories are required to notify state and national health officials of a probable or confirmed case.