A middle-aged patient with a history of HIV and poor adherence to antiretroviral therapy (HAART) presented to an outside institution with 1-week history of abdominal pain, nausea, and constipation.

CT scan of the abdomen revealed a large upper abdominal mass (20.1 x 12.4 x 9.5 cm) with small lucent areas, which were worrisome for a neoplastic process with focal areas of necrosis. Core biopsy was obtained, and initial pathology was interpreted as a CD10 positive high-grade B-cell lymphoma with very high Ki-67 approaching 100%. Patients was subsequently transferred to UC Davis Medical Center for higher level of care.

On admission, the patient continued to complain of abdominal discomfort and constipation. He denied B symptoms (fever, night sweats etc.). Patient was febrile, but alert and oriented. He appeared to be cachectic, irritable and was not in acute distress. His cardio-pulmonary examination was normal. Abdomen was firm and tender with bowel sounds present. There was no palpable lymphadenopathy or hepatosplenomegaly. His extremities were well perfused with no edema and no other significant physical findings. 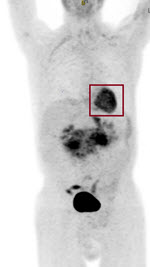