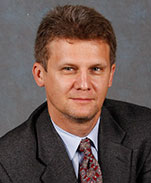 Dariusz Borys received his Doctor of Medicine from the University of Wroclaw, Poland in 1994 and completed a residency program in anatomic pathology at County General Hospital in Wroclaw, Poland in 1995. He completed his postdoctoral research at the University of Arizona, Tucson, Arizona in 1998. He continued on with and completed residency training in both anatomic pathology and clinical pathology at University of Illinois at Chicago in 2001. He received a Pediatric Pathology Fellowship at New York University, New York, New York in 2005 and followed that with an Orthopedic Pathology Fellowship at NYU Hospital for Joint Diseases, New York, New York in 2006.

"Ovarian Cancers: Where do they come from, why does it matter, and what are we doing about it?"