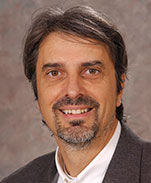 Dr. Sebastian Wachsmann-Hogiu did his undergraduate studies in Physics, with a major in Biophysics at the Bucharest University, Romania.  In 2000 he received his Ph.D. in Experimental Physics from Humboldt University/Max-Born-Institute, Berlin, where he used time-resolved Raman/CARS spectroscopy to investigate elementary chemical reactions.

After a two-years postdoctoral appointment in the Chemistry Department at Carnegie-Mellon University, where he performed Stark spectroscopy on conductive polymers and biological materials, he moved to Cedars-Sinai Medical Center as Research Scientist I.

In March 2005, he became faculty (assistant professor level) within the Surgery Department, and the Director of the Advanced Optical Imaging Laboratory within the Minimally Invasive Surgical Technologies Institute.  There, he was interested in translating novel optical technologies into viable tools for biomedical applications.

Since April 2007, he has been the Facilities Director at the NSF Center for Biophotonics, Science and Technology, UC Davis and in September of 2008 was appointed as Associate Professor in the Department of Pathology and Laboratory Medicine, University of California, Davis.

Sebastian co-authored more than 40 publications in refereed journals and book chapters and is actively participating in education programs at CBST and UC Davis. He is also interested in commercialization new technologies for the biomedical field. Currently, he is a member of the American Physical Society, Biophysical Society and American Chemical Society.

"Ovarian Cancers: Where do they come from, why does it matter, and what are we doing about it?"