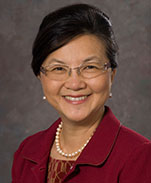 Dr. Wan received her B.S. from the School of Pharmacy at Taipei Medical University in Taipei, Taiwan in 1979. She received her M.S. in 1981 and her Ph.D. in 1983 in Experimental Pathology from Drexel University. She obtained a fellowship from NIH to study molecular biology of the liver before she became a faculty member in the Pathology Department at Harbor UCLA in 1989, and became a Full Professor in 2001. In 2003, Dr. Wan joined the Pharmacology and Toxicology Department at University of Kansas Medical Center and in 2007 was named the Director of the Liver Center and the Leader of the Cancer Biology Program at the Cancer Center. In 2012, Dr. Wan joined the Department of Pathology & Laboratory Medicine at the University of California, Davis Health.

As Vice Chair of Research for the Department of Pathology & Laboratory Medicine at the University of California, Davis, Dr. Wan oversees research activities of our faculty members and advances the department’s strategic research plan. She coordinates seminars, workshops, lectureships as well the annual research retreat. Additionally, she serves on the Advisory Research Committee, which supports the research and funding of our research programs. Within the UC Davis Health, Dr. Wan has fostered translational research through her service on biorepository activities and interdepartmental seed grants.

Dr. Wan is actively involved in service at the national and international levels. She has been serving NIH study sections continuously for the past 17 years. She is currently serving as Editor-in-Chief for Open Pharmaceutical Science Journal as well as an editorial board member for many other journals. In addition, Dr. has mentored over 100 people including faculty members, MD and PhD fellows, medical and graduate students as well as undergraduate students.

"MR Screening in Dense Breasts: How did we get here, how are we doing and where do we need to go?"